At the outbreak of World War 2, the War Department (WD) initiated the transfer of 300 O4 (ex-ROD) 2-8-0s from the LNER. By November 1939, the WD had chosen Stanier's LMS (London Midland Scotland) '8F' 2-8-0 design as its standard goods locomotive, and the transfer order was cancelled. All of the 'Big Four' companies constructed 8Fs for the WD, including the LNER who built sixty 8Fs between June 1943 and September 1945. These were lettered "LMS" and were officially on loan to the LNER until they were replaced by sufficient numbers of O7 'Austerity' 2-8-0s. These engines were built in five batches by Darlington and Doncaster between 1943 and 1945. They were transferred back to the LMS between 1946 and 1947.

In 1943, the LNER informed the Ministry of War Transport that it was prepared to pay for and absorb up to 100 of the type, as long as they could cancel all outstanding orders at the end of the war. This resulted in a firm order for 68 locomotives, with 43 built by the LNER and 25 built at the Southern Railway's Brighton Works. Deliveries started in June 1944 and continued into 1946. These were numbered and lettered as LNER locomotives, and were classified O6 in September 1945. Construction was split into four batches: Brighton (25), Darlington (23), and two from Doncaster (ten each).

The 8Fs were built with LMS "Type 3C" boilers. These consisted of two rings, the first was 5ft diameter and parallel. The second was tapered outwards to 5ft 8.375in. The boiler was fed by two injectors that delivered water onto feed trays. These feed trays de-aerated the water and helped the precipitation of scale solids. The firebox was of the Belpaire type.

Although built by the LNER and the SR, the O6s were fitted with standard LMS 4000 gallon tenders. However, there was some variation in the tank construction (welded vs. riveted), and many had disc wheels rather than LMS spoked wheels.

Allocations were to sheds that had heavy wartime and post-war traffic. Most noticeable were March, Mexborough, Immingham, Heaton, and Dunfermline. Mexborough's O6s took over the duties of many of the O4s including workings to Annesley, Banbury, Immingham, and over the Woodhead Route to Manchester.

Enginemen in the Scottish Area called the LMS "The Caley" after the former Caledonian Railway, and this name was carried over to the new O6 locomotives. The Scottish Area welcomed the new O6s due to the run-down nature of the local fleet and a general shortage of motive power. The Scottish locomotives mainly hauled goods from Edinburgh to Heaton; goods and coal from Edinburgh and Fife to Aberdeen; and occasional runs over the Waverley Route to Carlisle. 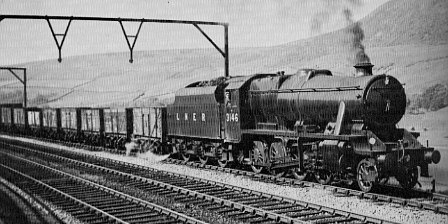 Just before Nationalisation (1948), the loan of 68 O7 'Austerity' locomotives was arranged so that the O6s could be sold to the LMS. With the exception of No. 3554, all of the O6s were transferred to the LMS before Nationalisation. No. 3554 was transferred in January 1948, and was technically a British Railways (BR) inter-regional transfer. The O6 classification was officially discontinued in May 1948.

Withdrawal of the BR 8Fs started in January 1964. The 8Fs survived to the end of BR standard gauge steam, with final withdrawal in August 1968. Six of these last locomotives were former LNER examples.

A number of Stanier 8Fs have survived into preservation, but only one served with the LNER. No. 48518 survived at Barry, but was still awaiting restoration forty years after withdrawal. It has since been broken up to provide a donor boiler for the GWR County 'new build' project.

Graham Farish sold a ready-to-run Stanier 8F for N Gauge. Since the Farish take-over, Bachmann have re-released the 8F in an LNER O6 livery.