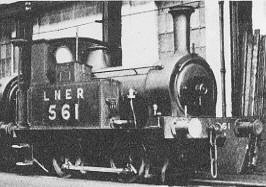 The Y8 was T.W. Worsdell's last design, and was specifically designed for the docks at Hull. A total of five of these tiny engines were built in 1890. These were numbered 559-63.

All five survived into LNER ownership. However, the Depression-era reduction in dock traffic and the increased use of Sentinel shunters led to the scrapping of three Y8s in 1936/7. 559 and 560 survived to the 1946 renumbering, and were renumbered as 8090 and 8091 respectively. Both survived into BR ownership, but neither survived long enough to acquire an updated '60000' number plate. 8090 was withdrawn in November 1948. 8091 was withdrawn to Departmental stock in June 1954 and became Departmental No. 55. It acquired a 50A shed plate and operated as a shed pilot at York.

With the exception of the WW1 loan of 559 for military work (Royal Arsenal at Woolwich, and Royal Engineer work at the mouth of the Humber), all five of the Y8s remained at Hull docks until the 1936/7 withdrawals. WW2 seriously reduced the amount of traffic coming into Hull, so in 1942 No. 560 was moved to York. At the beginning of 1945, 559 was moved to Springhead.

The Y8s were originally fitted with 'marine' type boilers, ie. with a cylindrical flue into which the grate fitted. Between 1902 and 1904, they were all re-boilered with more traditional boilers similar to those fitted to the Y7 locomotives.

Originally, all of the Y8s were fitted with a single whistle of the bell-shaped type. 560, 561, and 563 acquired the organ type during LNER ownership. 559 also had one of these whistles fitted, but after 1940. In 1942, 560 acquired the chime whistle from the Gresley A4 4469, which was destroyed during an air raid at York. By 1946, the original organ-pipe whistle had been restored.

Barrie Pawson has a number of memories (backed by diary entries) of No. 55 from his apprenticeship years:

An article in Steam World Issue 161 evoked many memories of my apprenticeship years at YORK M.P.D. 50A, 1955 - 1959, and later as a Fitter, until transfer to the Civil Engineer's Plant Section in Oct 1960. I well remember No. 55 (8091) or "THE PUP" as she was referred to by the artisan staff, as she was particularly useful during the preparation of tender locomotives for their Valves & Pistons examination. YORK shed, at that time consisted of 4 roundhouses, numbered 4,3,2,& 1, and No 3 was the one which was generally the place used for this long examination. (A V & P examination involves removal of all rods, connecting and side , as well as valves and pistons ) Space both sides of the locomotive was needed to accomodate all this gear, and there were few roads where this could be accomplished.

Before any dismantling took place, the engine was separated from the tender to enable examination of the buffing and drawgear. This is where No.55 came into her own, as she was the only pilot that could haul a locomotive (minus tender) onto the turntable, occupying the space where the tender had been, thus enabling the turntable to be turned, and the locomotive propelled in to an appropriate road for the V & P examination. Tenders were often left, as other smaller locomotives, could still use the remaining road space for their servicing or other examinations. Later, this procedure was reversed, and engine and tender reunited.

It will be appreciated that a diminutive locomotive such as this, was worth its weight in gold, and explains why the Shedmaster kept deferring Works visits, as he knew what would happen. Several times the engine was requested for Works treatment, and several times, the locomotive was "lost", "unavailable", or otherwise not able to be despatched!
(On a historical note, No.55 was at that time the only remaining LNER locomotive with JOY valve gear)

There was a rotation sytem in operation for apprentice training. (Industry later introduced a system known as "MODULE TRAINING" but we had our MODULES much earlier). Every 6 months we were moved between artisan staff who were adept at a particular 1ocomotive skill. Apprentices thus became familiar with all aspects of locomotive examination and repair procedures. This particular 6 months of my time were spent with George Jefferson, the oldest artisan in the shed, whose task was to repair and maintain the smal1er locomotives in YORK'S allocation, (J94, J25, J26, etc). However, his speciality was to attend to derailments with the depot's breakdown train! This was the prime reason for our secondment to this wily old hand. No.55 was one of his charges, and I was his apprentice at the time of the sequence of events that I can now relate :-

Whilst performing its particular duty, on 3 shed 'table, one of the shed foremen in attendance, was startled by the sound of a loud report from No.55, followed by a rush of air as a set-bolt whizzed by his ear, never to be found. The 'PUP' was engulfed in a cloud of steam, and an alternative method (pinch bars) had to be used to manoevre the V2 as the p i l o t was unable to complete its shunt. An examination of No.55 was carried out which confirmed that a set bolt from the cy1inder casting had failed. Next day, 10/2/56, we renewed the set bolt and over the next few days, No.55 was allowed to resume her duties.
However, a week later, 17/2/56, during minor repairs to an injector, the opportunity was taken to examine the inside of the smokebox. It was found that the wall of the steamchest was extremely thin and another steam leak could be expected. The foreman boilersmith decided to do a temporary repair but warned that this was only a short term solution, and heads would have to be scratched for a solution which would effect a more permanent repair.
George came up with the idea of presenting two steel plates inside the smokebox, one of which, (liberally coated with jointing compound) was placed on the thin walled steamchest, and the other, against the opposite side, both being separated and held apart by a 3/4 inch strecher bolt, made in the machine shop. This we did (21/2/56).
At the time, contractors were in the process of building an outside shelter for the Depot's 35 ton breakdown crane, and there was plenty of concrete being used for the construction of a new inspection pit. George decided to utilise this medium, so, after giving a final nip to the stetcher bolt, he supervised, while his mate, Jack, and I barrowed several loads, hoisting them up, and depositing them into the smokebox! We were all aware that this was likely to be the very last major repair that No.55 would ever receive!
It didn't last long, only 16 days, as on 19/3/56, another blow developed, and she was taken out of service. The rods and valve gear were removed in preparation for her last journey. This did not happen immediately, as a rumour spread that there was a spare cylinder casting at Darlington, and we were prepared to undertake an "On Shed" swap. It was then time for me to be allocated to another fitter, so that I cannot detail any discussions which may have taken place. All I can say is that on 15/5/56, she was noted in steam on light duties, and was still occasionally used on her particular skills.
19/10/56 A diesel shunter was provided for shed pilot duties (a Class 04 I believe) and No.55 was put up for scrap. The end came on 19/11/56 when she was loaded onto a Weltrol wagon, for despatch to Darlington works. Loaded, incidentally, by the same crane, whose new shelter had provided the wherewithal that gave her that extra lease of life.

None of the Y8s survived into preservation. However there are reports that either Beamish or the A1 Peppercorn Trust are considering building a new Y8.