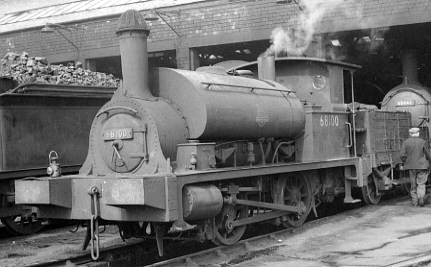 The NBR Class G locomotives were introduced by Drummond. The first two were purchased in 1882 from Neilson & Co, to their standard design. Originally purchased for dock shunting, they proved to be eminently suitable for light shunting in both docks and the Scottish lowlands. A total of 38 were built, with the last being built in 1899.

Although the term "pug" was used for different engines on different railways (eg. the Caledonian men called all tank engines "pugs"), the NBR reserved the name "pug" for these engines. Typically, the Y9s were driven by youngest drivers and firemen. However, senior men would also be posted on the Y9s for health reasons, or as a form of demotion for misdemeanors on the mainline. Apparently more than one driver known for speeding, ended up spending a number of years shunting Y9s at Leith Docks!

The Y9s were renumbered many times during their life with the NBR, and received preliminary numbers from the LNER, before being given 9000 series numbers in 1924.

The new boilers fitted between 1913 and 1923 had similar dimensions to the originals, but the safety valves were located under the dome. The only other major change with these rebuilds, was the replacement of the leading coupling rod ends with a solid-bushed pattern.

The Y9s were fitted with dumb buffers. Originally these were solid wood, but were eventually replaced with a metal framework covered with plate. However, the wooden buffer beams were kept.

Due to the small size of the coal bunkers (18cwt), various 4-wheeled wooden coal carriers were used as tenders. When used, these were connected with a conventional three-link coupling. For main-line running, two safety chains were added. In 1939, No. 9308 had its rear buffers removed, and a central drawgear added, so making the tender a permanent fixture. In 1944, Nos. 9011, 9063, 9144, 9146, and 10083, also had central drawgear fitted.

One Y9 has survived into preservation. LNER 9042 (NBR 42; BR 68095) has been preserved by the Scottish Railway Preservation Society and is kept at the Bo'ness & Kinneil Railway.

The Hornby Caledonian Railway (CR) 'Smokey Joe' model is based on a series of locomotives ordered by the CR from Neilson. These are essentially the same standard Neilson design as the Y9, but differ in a number of details including the buffers, safety valves, and cab side sheets. It should be possible to adapt the Hornby model into a Y9.

Thank you to the P.H. Groom collection for permission to use the above photograph of BR No. 68100.