The original Aerolite was a 2-2-2 built in 1851 by Kitson for the Great Exhibition. In 1854 this entered the ownership of the North Eastern Railway (NER) who used it to haul the Mechanical Engineer's saloon coach. This was completely destroyed in a collision in 1868, and a replacement was built in 1869. This new locomotive would eventually become the X1 No. 66 Aerolite described on this page. The new locomotive was a 2-2-2WT (well tank), but extra side tanks were added in 1886. The number 66 was added at about this time.

In 1892, the locomotive was given a major rebuild which probably only kept the original wheel centres and a boiler from 1886. The wheel arrangement was changed to a 4-2-2T, and two-cylinder Worsdell-von Borries compound working was applied. The side tanks and bunker were enlarged, and the well tank was removed. Due to the scale of the 1892 rebuild, this is often taken as the build date of the Aerolite which survives today.

In 1902, another rebuild switched the wheel arrangement from that of a 4-2-2T to that of a 2-2-4T. This resulted in the locomotive which remains to this day.

No. 66 Aerolite was fitted with Westinghouse brakes. A vacuum ejector was fitted in 1928 as a part of an LNER initiative to standardise braking systems. Raven fog signalling apparatus was also fitted.

Throughout the LNER's ownership of No. 66 Aerolite, it was based at Darlington and was used by the Chief Assistant Mechanical Engineer A.C. Stamer from 1923 to his retirement in in 1933. Aerolite was retired within one week of Stamer's retirement, and was prepared for preservation at York in 1934 (see picture).

These are the technical details for Aerolite at Grouping in 1923. 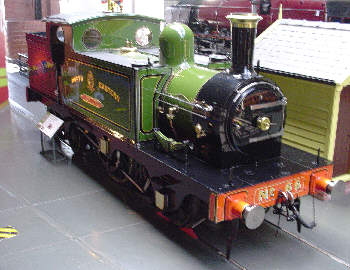 No. 66 Aerolite is preserved as a part of the National Collection in York.