The Wisbech and Upwell Tramway: Route

The tram started on the outer face of the 'up' island platform at the Wisbech East (former East Anglian Railway) station. In order to accommodate the tram carriages, the platform was only 1ft 2in above rail level.

Wisbech also had a small brick train shed built to house six of the steam tram locomotives, and a coal stage and water tank were located nearby. The shed was rebuilt in the early 1950s for use by the diesels.

This was the first request stop on the line. Trains were flagged across the level crossing by the signalman from the neighbouring Wisbech Harbour Junction Box.

The line crossed from Cambridgeshire into Norfolk, and continued to run alongside Elm High Road past these three request stops before the road turned sharply left and the tramline made a gated crossing.

Elm Bridge Depot was the first depot outside of Wisbech, and included a loop, siding, and a goods office that also served as a waiting shelter.

The line kept to the western verge passing these two request stops until it rejoined the canal.

After about half a mile, the tramline left the canal at Shepherd's Cottage - another request stop.

Following the road, the line then reaches Boyce's Bridge Depot which was near the halfway point along the line. The depot consisted of a gated siding and loop, and was often used as a passing point for the passenger trams.

The line then rejoined the canal at the actual Boyce's Bridge and the Dial House Farm request stop.

The line then followed the canal to Outwell Basin, and the location of the first terminus. The canal widened at Outwell Basin to enable mooring and turning of barges. The terminus depot covered a large area including a loop and a long siding, as well as a booking office and waiting room.

The line ascended a short 1 in 30 stretch which could even give trouble to the Drewry shunters on a wet day. The line then crossed back into Cambridgeshire and ran 30 chains on reserved track before crossing the main road at the Horn's Corner request stop. 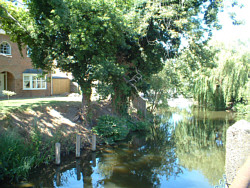 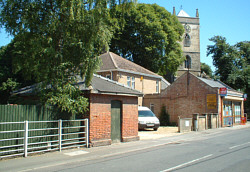 The tram followed the road's eastern verge and crossed the canal on a skew bridge just before entering Outwell Village Depot. The depot originally had four sidings and was equipped with coal chutes to transfer coal to barges for distribution through the Fens.

The depot had a brick office and an old van body for storage. The brick office still stands (see picture), but most of the depot site is now the site of modern housing and a cul-de-sac called "The Tramway". 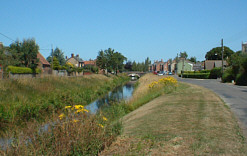 The line crossed the Outwell village street and re-entered Norfolk. It then ran alongside a by-road on the bank of Well Creek before reaching the final section of reserved track at Goodman's Crossing request stop. 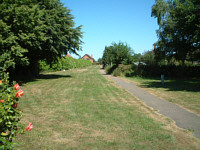 Once over Pingle Bridge Road, the tramline entered Upwell Depot at 5 miles 72 chains from Wisbech. The line fanned out to eleven sidings, with two originally allocated for passenger traffic. During the fruit season, these sidings would often hold over a hundred vans. The depot also had a cattle dock, depot office, passenger waiting room, and a coal merchant's office and staithes. There was also an ash pit, and an old GER tender was used for a water tower until 1953 when it was removed. 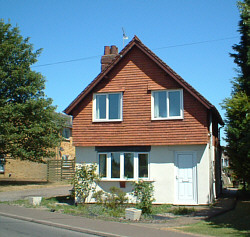 Next Page: Rolling Stock of the Wisbech and Upwell Railway.

Thank you to Rudi Newman for the modern colour photographs of the Wisbech & Upwell route.