Although the LNER used a variety of different valve gears, it will forever be associated with Gresley's conjugated valve gear.

Against a background of increasing train sizes in the early 20th Century, it was necessary to build locomotives that were more powerful and with a larger cylinder area. A move from two cylinders to three or four cylinders would enable this increase in power with greater efficiency, smoother running, reduced sway and hammer blow. Gresley preferred a three cylinder solution as this would aid maintenance and reduce fewer compromises in the steam passages. However, unlike a four cylinder arrangement, the motion for a central cylinder could not be trivially derived from the outside cylinders. One solution (as used in the Peppercorn A1 Pacific) was to fit a complete set of Walschaert valve gear on the central cylinder. Gresley considered this a compromise that added 'unnecessary' weight and could be difficult to maintain. His solution was a '2 to 1' lever that derived the motion for the central valve from the motion of the two external Walschaert valve gears. This became known as a 'Conjugated Valve Gear'. 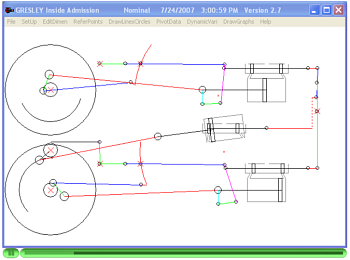 Gresley first describes the new valve gear in 1915, in his Patent No. 15,769 "Improvements in Valve Gear for Locomotive and other Steam Engines". Holcroft had filed a patent for a similar arrangement in 1909. After the expiration of this patent had been confirmed, construction of the first three cylinder locomotive was started. At this time, Holcroft also helped Gresley perfect the design. GNR/LNER Class O2 2-8-0 No. 461 was completed in May 1918. This was followed by a new K3 2-6-0 fast freight design in 1920.

Early trials of the K3 found that the central valve tended to over-travel due to rigidity of the cross member that carried the main pivot of the mechanism. This rigidity also resulted in the main pivot bearing bolts fracturing. The problems were fixed by reducing the valve travel, and fitting a cast steel box type cross stay.

Gresley was now ready to use the conjugated valve gear on a new express Pacific that he had been planning. The result was the famous A1 No. 1470 Great Northern, unveiled in March 1922. Although the A1 Pacifics proved to be capable locomotives, a set of trials against the Great Western (GWR) 'Pendennis Castle' 4-6-0 in 1925, showed them to have a hungry appetite for coal. This high coal consumption was due to the limited travel and short lap of the valves - implemented after the problems with the K3s.

The solution was to fit GWR-style long travel valves and the cast steel cross stay. Initially Gresley was reluctant to accept that the steel cross stay would be sufficient, but quickly accepted the solution after a trial with two Pacifics demonstrated a 20% reduction in coal consumption. 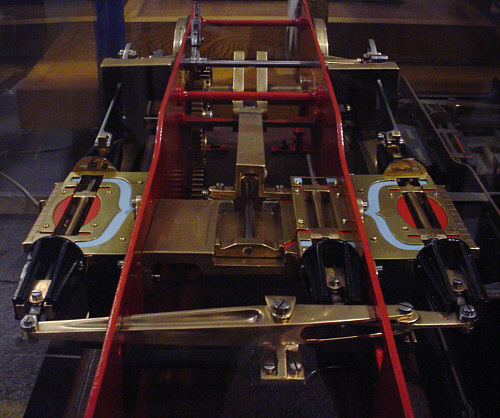 After these initial problems were solved, Gresley would use his conjugated valve gear on all of his large production locomotives, including the A4 Pacific, V2 2-6-2, and D49 4-4-0 classes.

Gresley's conjugated valve gear was not without criticism. The main problem was that it was sensitive to good maintenance. The excellent daily performances given by the A1s, A3s, A4s, and V2s during the 1920s and 1930s were dependent on good lubrication and a timely replacement of worn bearings. However, maintenance suffered during World War 2. Skilled labour became scarce, and the valve gear's roller bearings often had to be replaced by plain brushes which wore quickly. These problems led to poor valve timings and complaints from enginemen, although actual mechanical failures were very rare.

Gresley died in 1941, and was succeeded by Edward Thompson. Thompson ceased production of locomotives with the conjugated valve gear, and rebuilt a number of three cylinder Gresley types. Although it is usually considered that his criticism of Gresley's valve gear was over-stated, his switch to simpler designs (e.g. the Thompson B1) were much more suitable for wartime conditions.

The following pages within the LNER Encyclopedia provide more detail about related subjects:

Thank you to Charles Dockstader for permission to use his Windows Valve Gear Program for the above animation.