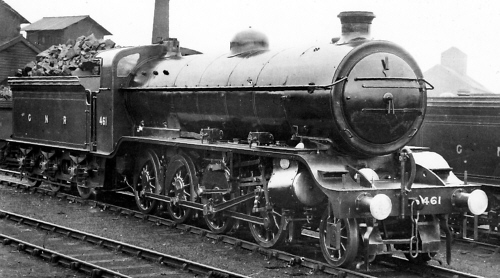 The O2 was a three cylinder development of Gresley's O1 2-8-0 mineral locomotive, and was the first design to use his conjugated valve gear. In 1915, Gresley applied for patent rights for a conjugated valve gear using either rocking shafts or motion levers to control the valves on the central cylinder on a three cylinder locomotive. The patent application recognised a similar attempt at using a two-to-one lever for the same effect. This is thought to be Joy's patent of 1884. In 1916, Gresley's patent agents informed him of a more recent patent of Holcroft's from 1909 that had lapsed in 1913. Therefore he continued with the application, and the patent was accepted in October 1916 (No. 15769). The frames for the first of the new engines were actually ordered in February 1916. An outline drawing appeared in August 1917 for a locomotive with two 21in by 30in cylinders. This design was dropped, and instead a three-cylinder development of the O1 was built, incorporating the newly patented valve gear.

The first O2 (No. 461) was built in May 1918. This used an alternate form of the conjugated valve gear with rocking shafts instead of motion levers. The advantage of three cylinders was that they allowed the same power from smaller cylinders. Smaller cylinders result in lighter pistons which experience significantly less wear. Shortly after No. 461 appeared, Gresley announced that he would concentrate on three cylinder designs in the future. Indeed, most of his famous designs such as the K3 2-6-0, A1 & A3 4-6-2s, A4 4-6-2, and V2 2-6-2 all had three cylinders and conjugate valve gear on the central cylinder.

The O2 used an identical boiler to that used on the existing O1s, although a Weir feed pump was not fitted. The pony truck was also of the same design as that of the O1, incorporating Gresley's double swing-link suspension.

A batch of ten further O2s were ordered in March 1919, and these were built by the North British Locomotive Co. in 1921. These featured a redesigned cylinder and steam chest layout, allowing the use of the simpler conjugate valve gear with 2 to 1 motion levers. This simpler form was actually suggested to Gresley by Holcroft, and had already been introduced on the K3 2-6-0. This would become the standard on the O2s, although No. 461 was never rebuilt with the simpler motion.

Immediately after Grouping (1923), fifteen more O2s were quickly built. In order to fit the LNER's 13ft 0.5in Composite Loading Gauge these engines were fitted with a lower profile cab, a re-positioned whistle, and a shorter chimney. These were classified as O2/2. Construction of a further fifty O2s was considered in 1924, but this was cancelled due to the availability of large quantities of war surplus O4 ROD locomotives.

All of the GNR O2s and the 1923 LNER O2s were built with split-ring piston valves. These piston valves suffered the same lubrication and wear problems as their counterparts on the O1s, and were replaced with Knorr-type piston valves from 1923.

The next order was placed in 1929, for eight O2s as a Group Standard type. With a depressed rail industry, requirements were not urgent and delivery did not occur until 1932. This was followed by a second order for eight in 1933, and then a hiatus until wartime requirements led to the construction of twenty five between 1942 and 1943 in three batches. All 41 Group Standard O2s were classified as O2/3. In total, 67 O2s were built by the Great Northern Railway (GNR) and the LNER.

In March 1939, the original eleven GNR O2s were rebuilt with lower cabs to fit the 13ft 0.5in loading gauge. Side windows were also fitted to the cabs. No. 3461 (the original O2) was classified as O2, whilst the remaining GNR locomotives were classified as O2/1 with the fitting of the side window cabs.

As a part of Thompson's standardisation plans, No. 3479 was fitted with a Diagram 100A boiler in October 1943. This was the same type of boiler as used on the new Thompson B1 4-6-0s, but was operated at 180psi. In 1944, four more O2s had Diagram 100A boilers fitted and were classified as O2/4 from 1945. The Diagram 100A boiler had a shorter barrel, so a special front bracket was constructed to attach the boiler to the frames just in-front of the dip in the running plate. The plans also included cylinder replacements if renewals were necessary, but none were fitted. 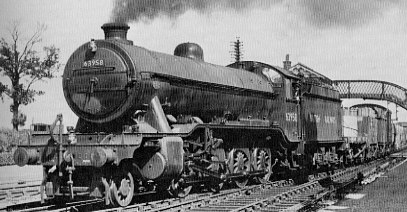 The 1932 and 1933-34 batches were allocated to March where they worked coal trains from Whitemoor Yard to Temple Mills (Stratford) on the Great Eastern (GE) section. At Grouping (1923), this line had relatively short refuge sidings, but by 1932 there were sufficient long refuge sidings to allow the operation of 80 wagon trains.

The 1942-43 batches were initially allocated to Doncaster where they hauled wartime traffic in all directions. In January 1944, all of the Doncaster O2s (including the 21 recently moved from New England) were allocated to Colwick to help with the immense wartime traffic in southern England in the build-up to D-Day. After August, Colwick's allocation was decreased with most of the O2s moving back to New England. During 1945, New England's O2s were re-allocated again. From the end of 1945, the class was divided between Colwick, Grantham, Doncaster, and March. The Grantham O2s mainly worked the iron ore workings in the Highdyke area. Langwith acquired thirty O2s in October 1946 to haul coal from Mansfield over various routes including the Woodhead Line to Manchester.

All 67 O2s survived into Nationalisation (1948), but No. 3921 (the original O2) was quickly withdrawn in May 1948 after exactly thirty years of service. This was probably due to the non-standard nature of No. 3921's motion. From February 1949, Diagram 100A boilers were slowly fitted to the remaining engines as their old boilers came up for renewal. In total, over twenty O2s were fitted with the new boilers.

Allocations during British Railways ownership varied throughout the former LNER lines in England. Frodingham had an allocation until 1955 to haul iron ore traffic. Grantham, Doncaster, and Mexborough all had varying allocations. Trips to Bridlington and Tyneside were recorded during this period, and in 1957 No. 63935 was even observed on the Hawes line hauling a pick-up goods.

Withdrawals of the remaining O2s started in 1960 with the withdrawal of four locomotives. Withdrawals accelerated with the last forty withdrawn in 1963. Sixteen appear to have been kept in storage for up to a year before being scrapped.

None of the O2s survived into preservation.

PDK sell etched kits of most variants of the O2 for 4mm scale (OO gauge). 4mm scale whitemetal kits are also available from Nu-Cast for the O2/2 and O2/3 forms.

ACE Products sell a kit of the O2 for 7mm scale (O gauge).

Thank you to the P.H. Groom collection for permission to use the above photograph of O2/2 BR No. 63940 at Grantham.