These locomotives were a standard design used by the US Army Transportation Corps (USATC), and shipped to Britain during World War 2 in large numbers ready for the Invasion of France in 1944. Prior to the invasion, they were used by all four of Britain's main railway companies, including the LNER.

During the 1930s, the US Army updated a Baldwin design from World War 1, to create class S159. The design was initially kept on the shelf as a contingency, with an order eventually being placed in April 1941 for eight S159 locomotives to use surplus funds. The USA was still officially neutral, and the requirement was not urgent. This resulted in the constructor (Lima Locomotive Works) making many design changes and finally producing the locomotives in 1942. No further S159s were built, but the experience probably led to a more efficient handling of the S160.

The S160 was designed in May 1942 by Major J.W. Marsh from the Railway Branch of the Corps of Engineers. The Corps would later become a part of the Transportation Corps (USATC). Many details from the 'Lend-Lease' S200 (a 2-8-2 designed for the British Army) were incorporated into the S160 design. However, the S160 was also an Austerity design with many features chosen for fast construction rather than long life, eg. axlebox grease lubricators were used, and rolled plates were preferred to castings. 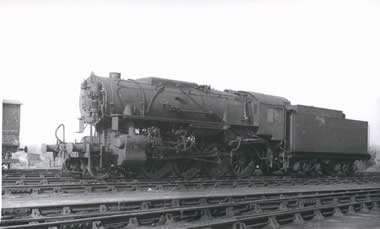 The S160 frames were made of 4.5in wide cast steel. The wheels were also cast steel. The driving wheels were fitted with 3in wide steel tyres. 0.375in had to be turned off the inside of the wheel flanges so that they could run on British track. In order to provide a relatively smooth ride when running on poor quality track, the front two driving axles were sprung independently from the rear two driving axles. This worked well when running on British track, but the tyre flanges were thin compared to British locomotives and caused the wheels to occasionally 'pick' points. This was a particular problem when running tender first over tight radius points.

The firebox was a slightly unusual design with three 3in diameter arch tubes supporting the brick arch. These tubes added a total of 15 sq.ft. to the heating surface, but tended to be weak. Later engines were built without these tubes.

The S160's tender was very large compared to British tender standards, and could hold 5400 Imperial gallons of water and 8 tons of coal. The layout was similar to the O7 'Austerity' 2-8-0 with the coal bunker inset above the water tank. This improved the visibility from the cab when running backwards. 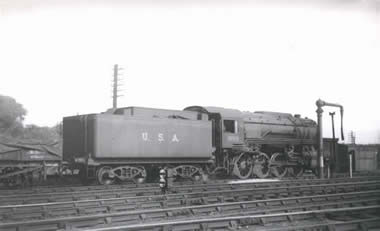 A total of almost 800 were built between 1942 and 1943, and shipped to Britain. These were constructed in thirteen batches by the American Locomotive Co. (Alco), Baldwin, and Lima. Although intended for use after the invasion, the first 400 were put to immediate use by the British War Department working with the "Big Four" railway companies.

The first forty three locomotives to arrive in Britain were overhauled by the LNER at Doncaster, and hauled local services whilst running in. The first S160s were concentrated in the South Wales area, so they were quickly transferred to the Great Western Railway (GWR) in early 1943.

Between March 1943 and January 1944, a total of 168 S160s would enter regular LNER service. After the first 400 entered service with the "Big Four", later S160s were prepared by USATC personnel at Ebbw Junction before being greased and stored ready for use after D-Day.

Whilst in LNER ownership, the S160s had their own livery of matte light grey with silver letters and numbers. At first the locomotives said just "USA" on their tenders, but later "TRANSPORTATION CORPS" was added. No. 2373 was painted in gloss black for a press exhibition. Before handing back to the US Army, many of the S160s were repainted in gloss light grey (see picture above). 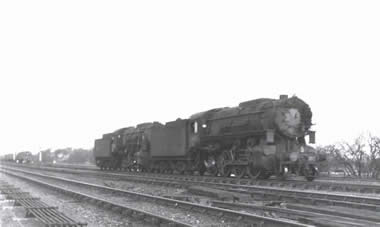 The S160s worked a lot of heavy goods traffic, but they had a high failure rate due to hot axleboxes, tubeplate fractures, and leaking firebox arch tubes. The hot axleboxes were directly due to the austerity measure of having grease lubricators on the axleboxes.

The S160s were powerful and free-steaming locomotives, but their braking was poor when compared to British standards. A steam brake was used for the locomotive, but was woefully insufficient due to the long distance from the driver's valve and the brake cylinder. 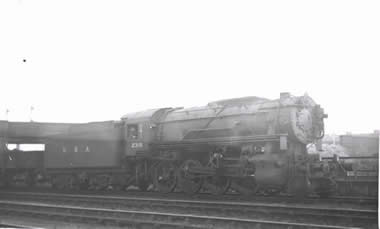 The S160s did suffer one major flaw. The roof stay bolts on the firebox would heat and tend to fail due to metal fatigue, if there was low water above the crown of the firebox. Poor boiler wash-outs would result in a build up of scale in the crown. This all contributed to a weakening of the firebox crown, and eventual collapse. In a space of ten months, three UK S160s suffered a collapse of the firebox crown. The first collapse was GWR's No. 2403 in November 1943, and killed the fireman. This was rebuilt using the boiler and cab from No. 1688 (broken frames). The second explosion was No. 2363 on 12th January 1944, whilst hauling an Ipswich to Whitemoor goods train past Thurston. The engineman was injured, and the fireman was forced off the footplate by the explosion. The third explosion occurred in South Harrow tunnel on 30th August 1944 when No. 1707 was working a goods train from Neasden to Woodford. The third explosion was not investigated fully due to the fact that the S160s were being handed back to the US Army, although No. 1707 was eventually rebuilt. 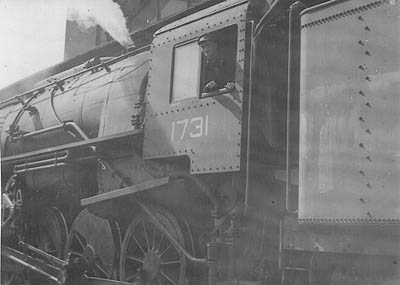 After the Invasion of France on 6th June 1944 (D Day), the Ebbw Junction S160s were prepared and shipped out to France. Then, the locomotives on loan to the "Big Four" were returned to the USATC and shipped out to France. The LNER lost the bulk of its allocation between August and September 1944. The exception was No. 1707 which had experienced the firebox collapse in August 1944. No. 1707 was officially removed from the LNER stock lists in February 1945 and finally arrived in Europe after May 1945 and the end of European hostilities.

In the aftermath of World War 2, the USATC disposed of the S160s to a number of European countries who were trying to rebuild themselves. 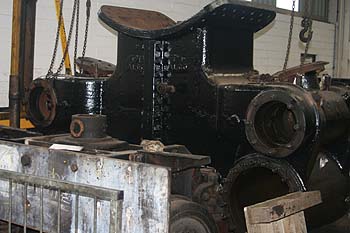 There are currently six S160s located within the UK. All have been imported from other countries, although some did serve in the UK during World War 2. Many more S160s survive overseas, and they are distributed far and wide.

Works No. 8758 is currently located at the Keighley & Worth Valley Railway and is undergoing a major overhaul.

No. 5197 (Works No. 8856) is privately owned and kept at the Churnet Valley Railway in running condition. No. 5197 was originally shipped from the US to China in 1945. It was purchased from the Chinese coal industry and imported into the UK in November 1995.

No. 3278 Franklin D. Roosevelt is usually located on the Mid Hants Railway. It is currently at Swindon receiving a major boiler overhaul.

No. 411 is located at the Birmingham Railway Museum.

No. 2253 was one of the S160s that worked with the LNER. It is currently at the North Yorkshire Moors Railway awaiting an overhaul. The LNER allocated No. 2253 to Neville Hill, so it is possible that it visited Whitby - very close to its current home.

No. 1631 is located on the Great Central Railway (Nottingham) at Ruddington awaiting a major overhaul.

DJH produce a kit of the S160 in HO scale. The photograph to the left is of a completed DJH kit with Alaska Railroad detailing and markings, completed by Pat Durand. Roundhouse Hobbies import them into the US. Thank you to Pat Durand for this picture. 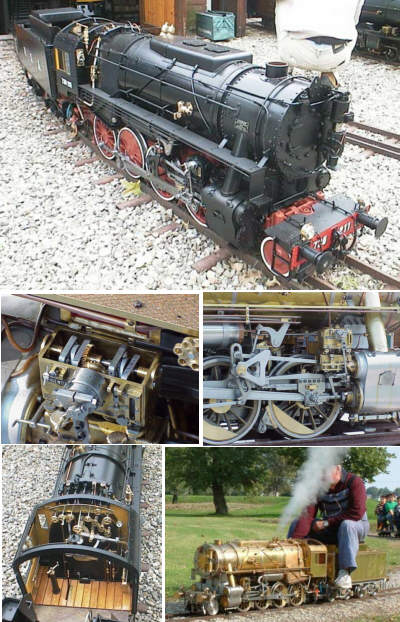 The two impressive 1/8th scale 7.25in gauge live steam S160s pictured to the right were constructed by Mr Luciano Vigentini of Milan. They were based on measurements taken from Italy's two surviving S160s, located in Milan and Naples. The unpainted locomotive is owned by Alfredo Campanini, and the painted one is currently for sale. Thank you to Alfredo Campanini for these pictures.

Thank you to Nigel Fisher of the Scunthorpe Telegraph for the above pictures of S160s operating in West Yorkshire. Railway photography during wartime conditions was illegal. This was especially true of the S160s, as information about their deployment and subsequement removal could have helped determine the date and location of the Normandy Invasion. Hence operational photographs of the S160s are extremely rare.

Thank you to Louise McDonald for the photograph of an S160 with her grandfather, Charles Ronald Holbrooke, as the driver. During World War 2, Charles Holbrooke was a regular driver on the S160s based in the Nuneaton area.