The LNER in Books, Film, and TV

LNER locations, locomotives, and rolling stock have appeared in a wide variety of fictional books, films, and TV. This page attempts to list all such occurrences, with short comments and major mistakes.

Documentaries are deliberately excluded. Due to a number of titles appearing in multiple formats and remakes, the titles are ordered in alphabetical order. This ensures that all versions of the same story are listed together (eg. The 39 Steps).

This page will always be a work in progress. Corrections, additions, and extra information should be posted on the LNER at the Movies thread in the LNER Encyclopedia forum. I will then copy changes and updates across at regular intervals.

Richard Donat; Dir. Alfred Hitchcock; loosely based on the book by John Buchan.

Richard Donat plays Hannay who escapes from London on the Flying Scotsman. This is seen leaving King's Cross hauled by A1/A3 Pacific No. 2595 Trigo. Hannay departs the train after pulling the chord in the vicinity of the Forth Bridge.

The book is set about 20 years earlier, immediately prior to the outbreak of World War 1. Hannay escapes via the West Coast Route to the Scottish Borders.

Mistake: The engine is initially an A1/A3 Pacific, which is correct for the route and time period, but it turns into a GWR 4-6-0 (No. 6000 King George V?) when seen leaving a tunnel. 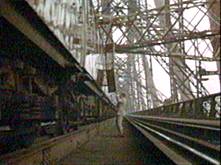 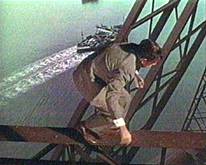 There are some nice, atmospheric shots taken at Waverley as Hannay joins a northbound express hauled by an A4 Pacific. Featured A4s are: No. 60024 Kingfisher, No. 60012 Commonwealth of Australia, and No. 60027 Merlin. His attempt to persuade the Police that he is a newly-wed fails when his "wife" rebuts his advances, so he opens the compartment door and climbs along the outside of the train. An express hauled by A1 No. 60147 North Eastern on the up line nearly swipes him (don't try this at home, kids). The pursuing Police stop the train, which is by now in the cantilever section of the Forth Bridge.

Hannay eventually escapes through an inspection hatch in the four-foot and, scrambling over steelwork high above the Forth, makes his perilous way down to South Queensferry.

Although most of the filming was in and around Bradford, Marlyebone stands in for Stradhoughton New Station (a thinly disguised Leeds City).

Some shots on Forth Bridge with A4 Pacifics:

Scene at 51:23 A4 traveling very fast, and in the split second you see it, there looks to be a plaque on the side. The number is probably 14 (Silver Link).

Scene 55:00 on the Forth Bridge, a super-imposed A3 Pacific travelling in the opposite direction.

Scene 55:11 A4 travelling away, but it is too far away to identify.

Edge-on view of an Ivatt C1 Atlantic with its characteristic wide firebox.

One of the main characters arrives at Scarborough by train near the start of the film.

Most of the railway footage is of GWR trains in South Welsh valleys, but there is a shot of a J15 pulling into an unidentified station.

Hull Paragon (masquerading as Norwich?). Appears near the start of the film where John Cleese gets on the wrong train.

An early episode features J36 No. 65345 painted in NBR livery, pulling in to Tannochbrae.

A1 No. 4472 Flying Scotsman at a number of East Coast Main Line locations and Hertford Loop.

SR Class N15 No. 771 Sir Saramore turns into B17 No. 2848 Arsenal en route. The shot of Arsenal is reportedly re-used in a variety of films.

Features a Deltic-headed express from London to Newcastle, including various shots along the route and the final arrival in Newcastle station.

Features two WD Austerity Saddletanks, one of which has been modified with dummy sidetanks. Both are War Department locomtoives that never served with either the LNER or BR. However, WD196 Errol Lonsdale masquerades as ex-LNER J94 No. 68011. The film was filmed on the Longmoor Military Railway.

Platform 9 3/4 is located at Kings Cross of course. The line to Hogwarts Castle is mainly filmed along the West Highland Line from Fort William to Mallaig. Glenfinnan Viaduct features prominently in many of the films. Goathland Station (on the modern North Yorkshire Moors Railway) appears as Hogsmeade Station in the first film (Harry Potter and the Philosopher's Stone).

Whitby to Scarborough LNER train hauled by a tank engine arrives at Sandsend The main parts of the film were shot at Butlin's Filey, which had its own station on the landward side, Sandsend was probably chosen because it was at the seaside.

Features Liverpool Street station and at least one F6.

The opening titles are shown over a backdrop of Liverpool Street station viewed from the city end. During this sequence, Bergmann alights from a suburban train hauled by N7 No. 69665.

Mistake: A lot of the rolling stock has BR numbers despite the film being set in the 1930s.

The opening scenes were filmed in Marylebone station.

Virtually all the action occurs in the vicinity of Kings Cross. The house is located over Copenhagen Tunnel. A mockup of the house was used for these shots, but the front of the house is a real house located further south near St. Pancras. There are lots of shots of A3s, V2s, N2s, etc as would be expected in the vicinity of Kings Cross in the 1950s.

Near the end of the film, Stratton (Guinness) attempts to escape town by rail. These scenes were filmed at Brimsdown near Enfield, and includes a Thompson B1.

Many shots along the GCR's London Extension, during the period that it was being closed by BR, including (?) Quainton Road.

Includes colour footage of B17 No. 2867 Bradford at speed near Denham.

Animated title sequence includes a silver-liveried A4 Pacific alongside RMS Queen Mary and an Imperial Airways HP 42, to indicate 1930s glamour. Hull Paragon has appeared in the series, dressed up as a Southern Railway terminus.

Filmed on the Bluebell Railway, but ex-NBR J36 0-6-0 Maude makes a number of appearances.

Newmarket with Thompson B1. A D16/3 is also featured.

Entire film is short in Thaxted, including a notable panning shot of the station and yard entirely deserted.

Filmed in Somerset and mainly featuring ex-GWR and ex-SR types; however the regular (14xx hauled) train's coach is from the Wisbech and Upwell. Two of this type were built - the other one survives in preservation.

This page will always be a work in progress. Corrections, additions, and extra information should be posted on the LNER at the Movies thread in the LNER Encyclopedia forum. I will then copy changes and updates across at regular intervals.