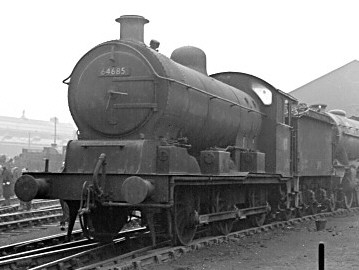 Hill's Class D81 (LNER J20) is usually considered the ultimate in traditional Great Eastern Railway (GER) goods engine design. The GER already had forty two ROD 2-8-0 (LNER O4) locomotives on loan from the Government working on the Cambridge line. It was expected that this line would see considerable increases in goods traffic in the immediate post-War period, and the J20 was built to meet this need. Following GER practice, the boiler and motion were borrowed from an existing passenger design. In this case, the B12 4-6-0 provided the boiler, cylinders, valve gear, pistons, and connecting rods. With a boiler pressure of 180psi and a tractive effort of 29,044lb, the J20 was the most powerful 0-6-0 design in the UK until the Bulleid Southern Railway Q1 'Austerity' was introduced in 1942. A total of twenty five J20s were built at Stratford in three batches between 1920 and 1922.

The use of the B12 4-6-0 boiler and motion resulted in a long wheelbase of 18ft 10in. Despite this long wheelbase, the J20s could still traverse curves of 4 chains radius - the same as the preceding J16, J17, J18, & J19 locomotives. The LNER eventually replaced the J20's spring-loaded side control trailing axleboxes with plain trailing boxes. This had the effect of restricting the J20s to curves of radius 5 chains or larger.

In 1925, No. 8280 was experimentally fitted with Lentz oscillating-cam poppet valve gear. This was the first application of Lentz valve gear in the UK, and was simply an experiment to collect data on steam distribution and coal consumption. The trial was deemed a success, and the Lentz valve gear was fitted to a number of LNER types, starting with the B12s. No. 8280 reverted back to conventional piston valves in September 1937.

In 1941, new boilers were required for the J20s and the un-rebuilt B12 4-6-0s. The opportunity was taken to redesign the boiler to meet contemporary LNER practice. The new boiler replaced the original Belpaire firebox with a round topped firebox. There were minor variations in boiler dimensions, but the GE-pattern superheater was retained. The J20s were re-boilered with the new boilers starting in 1943, and were classed as J20/1. Eight J20s still had their original Belpaire fireboxes at Nationalisation (1948), but these had all been re-boilered by 1956.

Most of the J20s were allocated to Cambridge and March, but individual engines often had short allocations to Colchester, Norwich, Lowestoft and King's Lynn. Stratford was also usually noted as having a couple of J20s. The J20s were usually used on the heavy coal trains between Whitemoor and Temple Mills. They continued operating these duties after the introduction of the larger O2 2-8-0s to East Anglia in 1932.

Although all of the J20s were fitted with vacuum ejectors, they were rarely used on passenger services until the 1930s. During the 1930s, the J20s were occasionally used on heavy cross-country excursion traffic to the coast. Cambridge also often used J20s for passenger services in an emergency. After World War 2, the introduction of further 2-8-0s including O7 'Austerities', displaced the J20s from the main line to cross country duties.

None of the J20s survived into preservation.

4mm scale kits of the J20 are sold by PDK, Crownline, and McGowan.

Thank you to the Mike Morant Collection for the photograph of No. 64685 at Stratford.