The Peppercorn A2 Pacifics

With the retirement of Thompson and his succession by Peppercorn, it was decided that the remaining fifteen A2/3 locomotives which had been ordered, should be built to a modified design. In fact, the Chief Draughtsman had already started to design a modified A2/3 in 1946, without the authorisation of Thompson.

The design continued to be amended through 1946 and 1947, with the first Peppercorn A2 completed before the end of 1948. This design kept Thompson's cylinder and valve arrangement, but had a more conventional bogie position and hence a shorter wheelbase. Also, the exhaust ducts from the outside cylinders were amended. A rocking grate was also fitted. The Kylchap exhaust was discarded from the design, but the self-cleaning smokebox was kept. As the A2 smokebox was shorter than the A2/3 smokebox, it would not have been possible to have kept both the Kylchap exhaust and the self-cleaning apparatus. The Kylchap arrangement may have also been discarded due to problems with smoke beating down to the cab. Some also suggest it was due to a desire to reverse many of Thompson's practices in favour of those of Gresley.

During these design modifications, the order size increased from the original fifteen to thirty five. However in May 1948, the last twenty were cancelled pending the results of the BR Interchange Trials.

The last A2 to be built, No. 60539, was fitted with a Kylchap exhaust when built. Due to the limitations of the smokebox size, the self-cleaning apparatus was discarded. This appears to have been a success, as five more of the class were similarly modified in 1949. 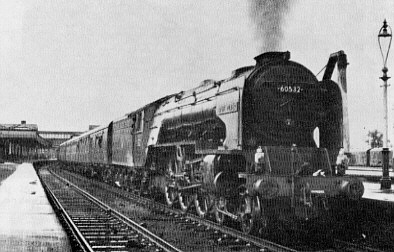 During trials, the A2s tended to be slightly less economical than the Peppercorn A1s, but noticeably more economical for the high power tests. These tests showed problems with the boiler design being used. The same tube arrangement was used irrespective of the boiler length. This was corrected with a large firegrate, which resulted in high coal consumption.

Initially, the A2s were allocated to English sheds. In 1949, five moved to Scotland to make up for deficiencies with the A2/2s (rebuilt P2s). By November, the A2/2s had been replaced with further Peppercorn A2s. These Scottish A2s were mainly used on express passenger services between Aberdeen and Edinburgh, which benefited from their greater power and acceleration.

The English A2s worked a variety of services, including express passenger, slow passenger, and parcel services. No. 60526 Sugar Palm was allocated to York and was regularly used to replace failed locomotives on the East Coast Main Line. Hence, it could often be found anywhere between Newcastle and London. In 1961, it set a speed record for the class of 101mph whilst descending Stoke Bank.

The A2s allocated to England were withdrawn between 1962 and 1963. The three remaining Scottish locomotives were withdrawn in 1966. One of these Scottish engines, No. 60532 Blue Peter, was sold into private ownership. 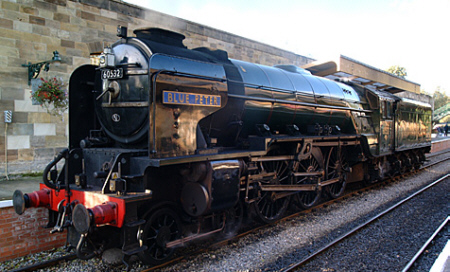 The only Peppercorn A2 to survive into preservation is No. 60532 Blue Peter. Saved by Geoff Drury, Blue Peter is currently owned by the Drury family and is on long term loan to the North Eastern Locomotive Preservation Group (NELPG). It is currently located at Darlington pending a major overhaul estimated at over £500,000. 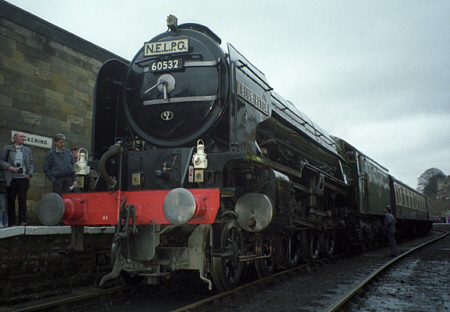 The children's TV programme of the same name helped to raise some of the money required for its first preservation-era overhaul in the early 1970s, and even today it occasionally features No. 60532. The name originates in the International Flag Code, but No. 60532 follows the LNER tradition of naming express pacifics after racehorses.

Trix used to sell a ready-to-run model of Peppercorn A2 No. 525 for OO gauge (4mm scale). OO gauge kits are available from DJH and PDK Models. Wills 'Finecast' and Crownline have both produced OO gauge kits. The Crownline kit is no longer available, but the Wills Finecast kit remains in production under the South Eastern Finecast name.

Foxhunter produce an N-gauge kit of the Peppercorn A1 which could probably be adapted into an A2.

David Andrews Locomotive Kits produce a kit of the Peppercorn A2 for O gauge (7mm scale).

Only No. 525 was technically built during LNER ownership, but 526-531 received LNER numbers. From 60532 onwards, the A2s received BR numbers from new. No. 60532 Blue Peter was sold into private ownership.

Thank you to Geoff Byman FRPS for the photograph of No. 60532 Blue Peter on the North Yorkshire Moors Railway.

Thank you to Sally Woolrich for the photograph of No. 60532 Blue Peter's return to steam during the early 1990s.

Thank you to the P.H. Groom collection for permission to use the above photograph of BR No. 60539 Bronzino.