The Great Central Railway (GCR) Class 9N (LNER Class A5) was Robinson's last passenger tank design. They were designed to pull the difficult suburban services out of Marylebone, which they performed admirably for over 30 years.

The GCR built three batches between 1911 and 1917. A fourth batch was ordered by the GCR, but was built after Grouping in 1923. The LNER ordered a fifth and final batch from Hawthorn, Leslie & Co. which was built between 1925 and 1926. This final batch was to fill a shortage of passenger tank locomotives in the North Eastern area. A total of 44 locomotives were built.

The A5s were amongst the first GCR locomotives to have superheaters. The first locomotives had superheaters of the Schmidt type, but over time, Robinson applied his various changes as he developed his own superheater design. This led to a number of different superheater variations existing on the A5s at first. Between 1915 and 1917, they were all brought up to the same standard and had what became known as the Robinson Superheater. Robinson's Superheater expanded the superheater elements into the smoke header, and had a combined blower and circulating valve, to protect the elements from the firebox gases when the regulator was closed.

The A5s were never rebuilt, but did experience some changes beyond the Robinson's superheater development. From about 1920, Ross pop safety valves were fitted. An experimental Automatic Train Control (ATC) system known as a 'Reliostop' was fitted on a number of A5s, including all of the 1923 batch. This was operated via lever below the running plate which made contact with trackside equipment. A number of locomotives were temporarily converted to oil burning to circumvent coal strikes in 1921 (10 locomotives) and 1926/27 (6 locomotives).

The A5s were built to the GCR loading gauge which was larger than the LNER Composite Rolling Stock Gauge. Even the 1923 batch was built to the larger GCR gauge. Over time, boilers were used with lower domes. Also, Gresley-style chimneys similar to those used on the N7s were fitted. The low domes and modified chimneys were fitted as standard to the 1925/6 batch. The GCR A5s were only brought into the LNER gauge after they were replaced by the Thompson L1s in 1948. 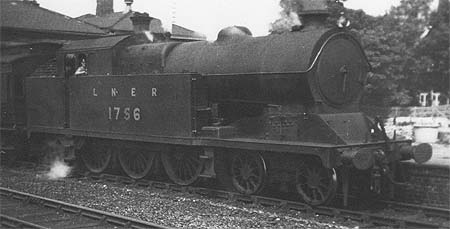 With the arrival of the 1923 locomotives, some of the A5s were moved north to the Bradford area, where they represented a large improvement in power capabilities. By 1928, six of the Bradford locomotives moved to Kings Cross where they operated services to Hitchin and Baldock. On these Kings Cross services, an A5 was recorded at 70mph which is believed to be a class record. In 1937, the LNER took over the London Transport line between Rickmansworth and Aylesbury, and replaced the line's H2 4-4-4Ts with A5s.

Between 1947 and 1949, a number of A5s were fitted with experimental ATC systems. Both the Hudd and the Great Western Railway (GWR) systems were tried.

From 1948, Thompson L1s replaced the A5s on their original Marylebone services. The surplus A5s were moved to Lincolnshire. From 1950, some moved north to the Darlington-Saltburn services, and in 1951 some moved to Hull.

Further replacements by Thompson L1s and diesels occurred during the 1950s, and withdrawals re-started in 1957. The last A5s were withdrawn in 1960.

The last A5 was withdrawn in 1960, and none survived into preservation. 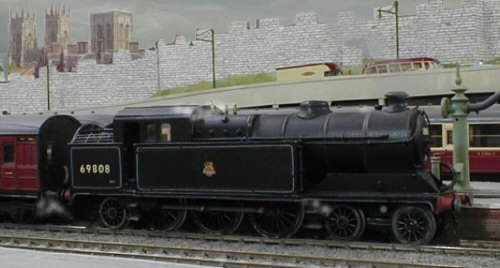 Both Nucast and Craftsman sell 4mm kits of the A5 locomotives. 52F Models also produce nickel silver / etched brass kits of the A5/1 and A5/2 locomotives to 4mm (EM/P4) scale. A separate OO chassis is also available.

A 7mm scale (O gauge) kit is available from MSC.

Thank you to 'Colombo' (from the forums) for the photograph of his model of the A5.

Thank you to Malcolm Peirson for the photograph of No. 5452.

Thank you to the Rosewarne family for the photograph of LNER No. 1756.