The Raven A2 Pacifics

The North Eastern Railway's (NER) development of express passenger locomotives was held up by World War 1, but resumed in 1921 with development of the very successful Raven Atlantic C7. Greater power and acceleration was required for the increasing loads on the East Coast Main Line, and hence Raven developed the C7 into a Pacific.

Authorisation to build the first two locomotives was received at Darlington on 30th March 1922. Line drawings were published July 1922 to counter the publicity of the appearance of the GNR's first Pacific. Both were recorded as delivered by December 1922 in time for Grouping (1923), although No. 2400 was still in shop grey and No. 2401 did not run until January 1923.

Raven created the A2 by stretching his C7 design. The cylinder size was increased, as was the boiler diameter. A wide firebox was fitted which spread out over the trailing wheels. Although the grate was slightly shortened, this wider firebox had to be behind the driving wheels resulting in a further increase in length. The length of the resulting engine proved to be a significant restriction on route availability. To counteract the adverse effects of longer boiler tubes, some of the tubes were increased in diameter. Boiler pressure was increased from 175psi to 200psi.

The three cylinder drive on the front coupled axle was kept from the C7 design. The valve arrangements and steam passages were unchanged, and were a handicap to the required handling of large volumes of steam. The choice of three sets of independent Stephenson valve gear (contrast to the A1's conjugated gear) had to be fitted in a confined space which resulted in limited bearing sizes. This was satisfactory for the C7, but the bearings on the A2 valve gear were expected to handle significantly more power. 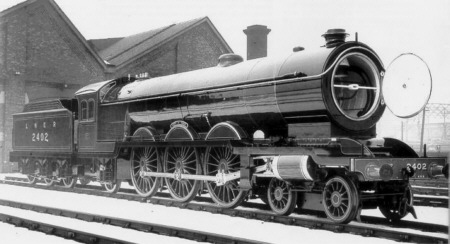 As can be seen, the A2s had a number of problems. The A2 was the biggest engine the NER built, but few could claim it was their best. Opinion at the time of development was that the A2s were rushed so that they would be completed before the NER ceased to exist. It should also be remembered that Raven had different thoughts as to how the East Coast Main Line passenger expresses should be developed. Concurrent to the A2 development, Raven was also trying to build a 4-6-4 electric locomotive to haul 450 ton passenger trains at up to 90mph. One of the big "What ifs" of British railway history, is how things would have developed if Raven's electrification plans for the East Coast Main Line had come to fruition in the 1920s rather than the 1980s.

Results with the first two engines were satisfactory, and three more were ordered in February 1923 - possibly in reaction to Gresley's appointment as CME of the newly formed LNER. However, before construction had begun, Gresley modified the rear bogie to have A1-style rear bogies.

There was little difference between the A1 and A2 when they were tested in 1923. The main difference was that the A2 did a better job of maintaining full boiler pressure. However, in October 1923 the future of the A2 was pretty much decided when 40 A1s were ordered. The A1s were considered a better design and had more scope for further development (eg. with better valve settings).

The A2s were originally allocated to Gateshead before being moved to York in 1934. With the exception of a few visits to Kings Cross in 1923 for the trials, they spent their first 10 years between Grantham and Edinburgh, with some runs to Leeds. Whilst at York, they mainly ran heavy secondary express passenger trains on the East Coast Main Line, although they also occasionally ran freight and mail trains.

From September 1929, No. 2404 was fitted with a modified A1 boiler. Due to the small size of the class, it was not practical to build a new set of boilers, so a spare A1 boiler was used instead. Both the new boiler and the locomotive had to be modified. The firebox was extended to fit the longer A2, and the A2 footplate had to be made wider.

In 1933, the use of A3 boilers was considered, although none of the A2s were eventually fitted with them. Also in 1933, standard Gresley 8-wheeled non-corridor tenders were ordered. These replaced the original NER 6-wheeled tenders in late 1934. The NER tenders were fitted to newly built J39s.

A combination of their limited route availability, and the need for new boilers at about the time the first V2s appeared, led to withdrawal between 1936 and 1937. Four of the original boilers were scrapped at the same time, but the fifth (from No. 2400) was converted into a stationary boiler in 1937 for use at Darlington. It was scrapped in May 1939.

No. 2402 was the first locomotive built by the LNER to be scrapped.

The following technical details are for the A2s at Grouping in 1923.

None of the A2s survived into preservation.

In the past, DJH have produced a kit of the Raven A2 for OO gauge (4mm scale) but this is no longer available.

ACE Products sell a kit of the A2 for O gauge (7mm scale).

Thank you to Morgan Gilbert for the photograph of his finished model of No. 2400.

Thank you to Malcolm Peirson for the photographs of No. 2402 City of York and No. 2404 City of Ripon.