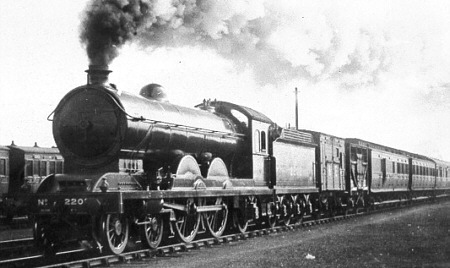 Raven was a firm believer in the advantages of three cylinder locomotives such as smoother toque, easier blast on the fire, and better balanced rotating parts. With the success of Worsdell's T1 4-8-0T and his A7 4-6-0T locomotives with three cylinder propulsion, Raven was ready to build a three cylinder express passenger locomotive. In August 1910, he was given permission to build twelve such locomotives, that would become Class Z (LNER C7). These were initially described as 'based on Class R1 (LNER D21)', although they were eventually more like the V/09 Atlantics (LNER C6). The first drawings were produced in October 1910 and referred to the class as Class V2. This was later altered to Class Z.

The last locomotive to be built, No. 2212 was built with Stumpf 'Uniflow' cylinders. These were designed so that steam would flow through the cylinders in one direction only. 'Uniflow' cylinders had already been fitted to B15 4-6-0 No. 825 with an untidy result, but the arrangement had been tidied-up for No. 2212. The arrangement required double-length cylinders, resulting in a longer bogie wheelbase and smaller wheels. Comparisons were made between No. 2212 and standard Class Zs. The results are unknown, but they must have been satisfactory because the arrangement was kept until 1934. However, the system was not used any further, so any savings in efficiency cannot have been significant.

During LNER ownership, Gresley used the C7s to test a number of different pieces of auxiliary equipment. Three C7s were used for trials of Dabeg and ACFI feed water heaters. These attempted to use waste heat from the exhaust steam to preheat water before it entered the boiler. Normal injectors did not function well with hot water, so feed heaters also had to incorporate pumps. The Dabeg mechanism had a pump with a mechanical drive from the rear coupled wheel, which had the disadvantage that it only worked when the locomotive was in motion. No. 2163 was fitted with a Dabeg feed in 1926, but it was removed in 1937. In 1928, Nos. 2206 and 728 were fitted with the ACFI heater which used a steam-operated pump. The ACFI heaters were found to have maintenance costs that were not sufficiently offset by efficiency savings. They were finally removed in 1941 and 1942 as poor wartime maintenance took its toll.

In 1931, Nos. 727 and 2171 were fitted with boosters on their rear bogies. The rear bogies were extended to two axles, and articulated the engine and tender. These two locomotives were reclassified as C9.

In December 1933, No. 732 had Lentz rotary cam-operated valve gear fitted. In 1934, the Uniflow No. 2212 was rebuilt without the Uniflow arrangement. Needing new cylinders, the opportunity was taken to also fit the Lentz valve gear. The rebuild appears to have taken some time, and No. 2212 re-entered service in January 1936. The Lentz locomotives were fitted with 17in diameter cylinders of the same type as used on the D49/2 'Hunt' locomotives. Anecdotal evidence suggests that the Lentz C7s ran well with a crisp exhaust beat, but the overall improvement was not sufficient for more C7s to be converted. Both kept their Lentz gear until withdrawal. These two LentzLentz valve gear locomotives were classified as C7/2, whilst the classification of C7/1 was used for theoriginal C7s.

The C7s were initially used on express passenger services. By Grouping (1923), thirty were allocated in the Tyneside area, with the others allocated to York, Neville Hill, and Haymarket. It appears that the C6s, C7s, and C8s were used together as a group, with no type preferred over another for any specific duties. The arrival of the A2 Raven Pacifics in the Tyneside area, displaced a number of C7s to York and Neville Hill. When used on secondary lines, the C7s quickly developed a reputation as poor hill climbers and often had to be double-headed.

From 1924, C7s were frequently seen running through to Kings Cross hauling specials to the British Empire Exhibition, and specials for rugby and football finals.

As the Gresley Pacifics became more common and the A4 Pacifics were introduced, the C7s started to frequently appear on the more important branch lines, such as York to Hull, York to Scarborough, and Newcastle to Carlisle. C7s were often double-headed as replacements for the Pacifics in the event of a failure. With the general speeding up of goods trains, and increasing numbers of fitted goods trains, the C7s began to be seen on faster freight services such as fish trains.

Although increasing numbers of A3 Pacifics and A4 Pacifics displaced the C7s, it was the increasing numbers of V2 2-6-2s in the late 1930s that began to spell the end for the C7s. Withdrawals would have probably begun before 1940, but the arrival of World War 2 delayed withdrawals until August 1943. Withdrawals continued, with only fourteen survived into Nationalisation (1948). British Railway was quick in withdrawing these last C7s, and the last was withdrawn in December 1948.

None of the Raven Class 'Z' (C7) Atlantics survived into preservation.

Thank you to Malcolm Peirson for the photographs of No. 2212 with the Stumpf Uniflow cylinders, and No. 2202.