Anticipating heavier traffic loads, the Great Central Railway (GCR) placed an order for four express passenger engines with Beyer, Peacock & Co. in 1903. For comparison purposes, two were 4-6-0s (LNER B1) and two were Atlantics of GCR Class 8B (LNER Class C4). The locomotives were as identical as possible, including the shallow firebox required on the B1 to clear the rear driving axle. As well as comparison purposes, the similarity in designs was intended to allow conversion of the C4s to 4-6-0s if required. All four engines were based on Robinson's earlier B5 4-6-0s, and featured two outside cylinders, and inside Stephenson valve gear with slide valves.

Traffic loads did not increase as significantly as expected, and when further express passenger locomotives were required, the Atlantic C4s were built rather than the larger B1 4-6-0s. A total of twenty five further C4s were built in three more batches from 1904 to 1906. These were built with deeper fireboxes due to the removal of the 4-6-0 restriction. In 1909 and 1910 the original two C4s were rebuilt with matching deep firebox boilers.

The C4s had classic Robinson looks and quickly acquired the nickname of 'Jersey Lilies' after a contemporary music hall star.

In 1908, Robinson rebuilt No. 1090 with three simple expansion cylinders, as a comparison against his 3-cylinder compound Atlantics (LNER Class C5). No. 1090 was chosen as it had recently entered Gorton Works after sustaining severe damage to the cylinders and frames due to extreme speed. All three cylinders were fitted with Walschaerts valve gear - unique for GCR steam power with the exception of railcars. The drive was divided. The outside cylinders drove the rear axles (as with the two cylinder C4s), but the middle cylinder drove the front axle. No. 1090 was converted back to two cylinders in 1922, and the Walschaerts valve gear was replaced by Stephenson gear.. 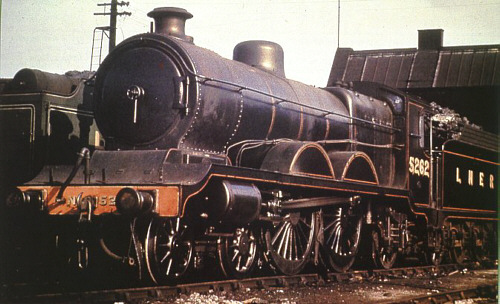 The first seven C4s had steam sanding gear on the front driving wheels only. Later engines would be fitted with steam sanding gear on all of the driving wheels. The pioneer two locomotives had a second set of sanding gear fitted at a later date. From 1921, the gradual replacement of the original four-column Ramsbottom safety valves with Ross pop safety valves started. At the same time, ash ejector were fitted to help clean the smokebox with live steam. The LNER did not favour use of the ash ejectors and they fell into disuse. Some were removed after 1945, although a number of C4s still had them when withdrawn.

In January 1925, No. 6085 was fitted with an LNER 'flowerpot' chimney, and cut down to the LNER Composite Gauge. Although flowerpot chimneys were fitted to other C4s in 1925, it would not be until 1936 before other locomotives were cut down to the Composite Gauge, ready for use on the former GCR lines. This process was completed in 1939.

The first C4s were allocated to Gorton and Neasden, to haul the London to Manchester express trains. Reciprocal excursion running rights existed between the GCR and the Great Western Railway (GWR) during 1904, and C4s operated a number of excursions to places such as Weymouth, Weston-super-Mare, and Plymouth. A C4-hauled working from Manchester to Plymouth via Banbury and Bristol, set a British record for the longest through working. This would last over twenty years, until the East and West Coast London to Scotland express services would start.

An allocation was given to Leicester in 1906, and this would eventually become the largest allocation of C4s in the LNER network. Leicester had sixteen C4s by 1923, whilst the remaining eleven C4s were allocated to Woodford.

Growing train sizes were becoming a significant problem for the C4s by about 1932. Replacement with more powerful engines finally occurred in 1936, when the C4s were displaced from express passenger services by the B17 4-6-0s. The C4s moved to lighter services, and their allocations tended to change much more frequently than when they were hauling the top-link express services. This is when the bulk of the class was cut down to the LNER Composite Gauge, enabling their allocation to other parts of the LNER network. Allocations during this period included Cambridge, Colwick, Immingham, Lincoln, and Ipswich. As well as slower passenger services, the C4s were sometimes called upon to haul fish services. These mixed allocations across the GCR and Great Northern (GNR) networks continued during World War 2.

The first withdrawal was in 1939, after No. 6090 was involved in a collision at Banbury. This was the same engine that suffered severe damage from high speed running and was rebuilt as a 3-cylinder compound for fourteen years. Locomotive shortages during World War 2 kept most of the remaining C4s in service. By 1945 it was clear that the LNER's Standardisation Programme would not have any room for forty year old Atlantics, and withdrawals were accelerated. Twenty survived into British Railways ownership, and the last six were withdrawn in 1950.

None of the C4s survived into preservation. However, Jamie Green is currently looking into the possibility of a new-build C4. If you are interested in this ambitious project, please join his Yahoo-based listserver.