The Thompson A1/1 Pacific

A1 (by then reclassified A10) No. 4470 Great Northern was selected for rebuilding. It is unfortunate that Great Northern (the very first Gresley Pacific) was chosen for this rebuilding, rather than being selected for future preservation. There has been much debate on the reason for this choice. Some state it as bad luck, whilst others clearly blame Thompson for letting his personal feelings towards Gresley to cloud his judgement. It is known that the Chief Draughtsman and a number of high up officials within the LNER unsuccessfully tried to deter Thompson from rebuilding this engine. 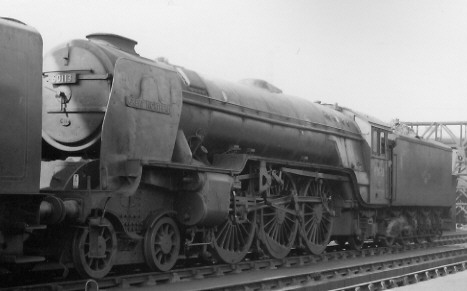 A new set of frames were built for the rebuild. These were similar to A4 frames except for the wheel spacings at the front. The resulting wheelbase was 38ft 5in, even longer than the Gresley P2s.

Originally, the plan was to rebuild all of the remaining A10s but this never occurred. There were also plans for streamlining, but these were never acted upon.

In October 1945, the order was given to construct sixteen new locomotives to the new A1/1 plan. These finally appeared during Peppercorn's tenure, by which point the A1/1 design had evolved into the Peppercorn A1 Pacific design. Great Northern was actually officially designated Class A1 until 1947 when it was reclassified Class A1/1 in anticipation of these new Peppercorn A1 Pacifics.

In the first few years of service, the rebuilt Great Northern suffered a number of teething problems. These were fixed, but it never played a prominent role on the East Coast Main Line. Although it was occasionally allocated to Kings Cross, it spent much of its career based at Doncaster or Grantham. Great Northern was even allocated to be the Grantham pilot for a while during the mid-1950s.

Great Northern was renumbered No. 113 in Thompson's 1946 renumbering scheme. It then became No. 60113 during British Railways ownership, before being withdrawn on 19th November 1962 with a badly worn middle cylinder.

Although usually remembered as a folly on Thompson's part, it has to be remembered that the A1/1 was a better locomotive than either the A3 or A4 Pacifics before they were converted to use Kylchap exhausts.

Although No. 4470 Great Northern would have been an ideal choice for preservation, this was not to be. Rebuilt as Class A1/1, it was withdrawn in November 1962 with mechanical problems.

The late LBSC designed a 3.5" gauge locomotive called 'Hielan Lassie' that is a good representation of the A1/1 without the smoke deflectors.

Thank you to the P.H. Groom collection for permission to use the above photograph of BR No. 60113 Great Northern with large smoke deflectors.