The P2s were designed to handle the express passenger traffic on the Edinburgh to Aberdeen main line, which is noted for its steep gradients and tight curves. Double-headed Pacifics were prohibited from the line, so the heaviest traffic was usually handled by double-heading two smaller engines. Gresley sought to overcome this need with a Mikado (2-8-2) design with four driving axles for greater adhesion compared to an A3 Pacific. Initial plans were drawn up in 1932, and consisted of a 2-8-2 Mikado design using an A3-type boiler and dual chimney. Whilst the design was still being finalised, two engines were authorised in February 1933. At the end of March, this initial order was reduced to one locomotive. The firebox was lengthened, and a double blastpipe was added. The Kylchap chimney/blastpipe arrangement was chosen, along with an ACFI feed water heater, and smoke deflectors reminiscent of the W1 No 10000 "Hush-Hush".

After the successful experiments with the Lentz rotary cam poppet valve gear on the D49s, Gresley decided to fit similar valve gear to the P2s and directed Associated Locomotive Equipment Ltd to design a set of Lentz valve gear for the P2s. The gear was powered by two camshafts above the cylinders and at right angles to the locomotive horizontal centre line. These camshafts were synchronised with the rotation of the driving axles. Admission and exhaust valves were controlled by six scroll cams mounted on these two camshafts.

Initial drawings were provided in July 1933. Further changes would be made through to March 1934. The smoke deflector plates were moved forward so that they extended far ahead of the smokebox. Wind tunnel tests led to the deflectors being made vertical. A V-shaped cab front was also added. During these changes, five more P2 locomotives were ordered, but with a choice of valve gear left open.

This first locomotive, No. 2001 Cock o' the North was completed in May 1934. Early indicator tests showed low final compression pressures. This was found to be due to excessive clearance spaces in the poppet valve layout, and was fixed by adding a new exhaust cam for the left-hand cylinder, and advancing the closure point of the exhaust valves from 65 percent to 50 percent of the stroke. The scroll cams and rollers experienced very heavy wear due to their contact occurring at a point. These were substituted with stepped cams with parallel surfaces which contacted along a line. In March 1935, a circulating system for the cambox oil was added. This was powered by small pumps and incorporated a small copper pipe radiator mounted on the frame.

In December 1934, No. 2001 accompanied by O.V.S. Bulleid travelled to the locomotive testing station at Vitry-sur-Seine near Paris for two months of testing. The ambitious test programme had mixed success due to problems maintaining boiler pressure, and overheating axleboxes and bearings. The latter appear to have been due to the relative lack of vibration on the test station, leading to occasional breaks in the lubrication films failing to seal immediately. Blastpipe trials at Vitry found the best combination to be a 6in diameter blastpipe top with No. 1 taper blocks fitted. The exhaust beats were found to be uneven, and unequal clearance volumes were suspected. These were reduced slightly by modifying the steam passages on its return to Doncaster, but this did not fix the problem. After further testing on its return, No. 2001 entered service in Scotland.

The ACFI feed water heater on No. 2001 gave a lot of problems, and was never fitted to the other P2s. The heater used exhaust steam to heat the water before it was injected into the boiler. To work properly, the locomotive had to run continuously with its regulator open. This was not possible on the Edinburgh to Aberdeen route which the P2 was designed for, and so the ACFI feed water heater was wasted.

The second locomotive, No. 2002 Earl Marischal was completed in October 1934. This was identical to No. 2001 Cock o' the North but with piston valves, Walschaerts/Gresley valve gear, and the ACFI feed water heater was removed. This also ran a series of trials before entering regular daily service in Scotland in June 1935. Due to the use of Walschaerts and Gresley valve gear rather than the poppet valve gear, No. 2002's draughting characteristics were different to those of No. 2001. Trials found that a combination of a 5.75in diameter blastpipe top and No. 3 taper blocks worked best. This combination was made standard for Nos. 2003-6, and was also used on No. 2001 when it eventually had its poppet valve gear replaced.

The remaining four locomotives were completed in 1936. As with No. 2002, they had piston valves and Walschaerts/Gresley valve gear, but they had streamlined fronts similar to those of the A4 Pacifics. Although the A4 Pacifics has only been introduced the year before, their shape was clearly superior to the P2 deflectors for lifting the smoke above the cab, and hence was chosen as the new P2 front-end shape. There were smaller differences between these four locomotives. No. 2004 Mons Meg had a bypass valve to divert some of the exhaust from the blastpipe. No. 2005 Thane of Fife had a single (non-Kylchap) chimney. No. 2006 Wolf of Badenoch had a longer combustion chamber in its firebox, in an attempt to aid complete combustion of the coal.

All of these variations were covered by three sub-classifications of Class P2. No. 2001 with poppet valves was classified as Class P2/1. Class P2/3 was used for No. 2006 with the longer combustion chamber and piston valves, whilst the remaining four locomotives with piston valves were given the classification of P2/2.

No. 2002 Earl Marischal entered Doncaster Works in October 1936 for its first heavy repair. This opportunity was taken to convert the front end to the A4-style of Nos. 2003-6. No. 2001 Cock o' the North was similarly treated in September 1937 when it also entered Doncaster Works for heavy repair. It also had its ACFI feed water heater removed, and its poppet valves replaced with Walschaerts/Gresley valve gear to bring it in line with the other members of the class (P2/2).

The P2s tended to suffer from a large number of damaged driving crank axles due to the overheating of the big-ends. This was partly due to the stresses at the front end caused by pony truck faults. The same swing-link pony truck mechanism employed on the K3 2-6-0s was used, even though this design had exhibited problems with both the springs and sufficient lubrication. Associated weakening would occasionally lead to failure of a crank axle whilst in traffic. These failures appear to be a major contributing factor to Thompson's decision to rebuild the P2s as A2/2 Pacifics. As a part of the rebuilds, Thompson used coil springs to centre the leading bogies, and it should be noted that none of the A2/2 Pacifics suffered crank axle failures.

After the death of Gresley in 1941, Thompson took over and began his standardisation plans. Due to their small numbers and mixed success, it was almost inevitable that the P2s would be rebuilt by Thompson. Between January 1943 and December 1944, all six were rebuilt as A2/2 Pacifics.

Although often described as a mixed success, the P2s were a bold step forward for British locomotive design. They had a reputation for heavy coal consumption, but this was only really a problem with No. 2001 when it was fitted with its original poppet valve gear. The pony truck had problems, but as with the V2 2-6-2 locomotives, it could have been successfully redesigned. Also, if they were ill-suited for the Aberdeen route as many imply, how come they served their entire lives on the route for which they were designed? It is true that the longer fixed wheel-base did pose problems for the tight corners on this route, but the extra axle gave useful increase in adhesion for this steep route. As with all locomotive designs, the P2s were a trade-off between conflicting requirements.

The following details are for the P2/3 and P2/2 (streamlined) variants. Mechanically these were the same before streamlining, although No. 2001 "Cock o'the North" was fitted with Lentz R.C. motion with 8" poppet steam and 9" poppet exhaust valves. The total heating surface was also slightly larger (3490.5 sq.ft). This was converted to match the other five P2s in 1938.

All of the P2s were rebuilt as A2/2, and neither the P2s nor the A2/2s survived into preservation.

However, there are currently two projects to build a new P2. The P2 Steam Locomotive Company Ltd has been founded by many of the people who built No. 60163 Tornado, and intends to build a P2 with the original Cock o' the North streamlining. A second project, based in Doncaster, intends to build a later A4-shaped P2.

Hornby sell ready-to-run models of the P2 for OO gauge.

Nu-Cast produce a 4mm scale (OO gauge) kit of the P2 in both of its body types. A kit is also available from Proscale. Crownline, Fulgarex, and Ks Loco Kits have all produced kits of the P2 for 4mm scale, but they are no longer available.

7mm scale (O gauge) models are available as a kit from ACE Products and ready-to-run from LH Loveless.

A tinplate O gauge model thought to date from the 1930s operates at the Brighton Toy and Model Museum. 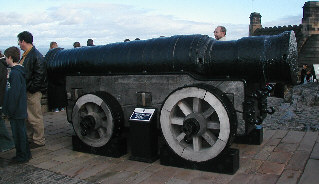 All six locomotives had names related to the area surrounding the Edinburgh to Aberdeen line:
Cock o' the North was the nickname given to George, the Fifth Duke of Gordon (1770 to 1836). The name was previously used on Atlantic C10 No. 9903 which was renamed Aberdonian.
Earl Marischal was the hereditary title of the Keith family, whose seat (Dunnottar Castle) was visible from the line near Stonehaven. The title has never been used since the family took the Jacobite side in 1715.
Lord President is thought to refer to the Lord President of the Court of Session in Edinburgh - the Scottish equivalent of the Lord Chief Justice.
Mons Meg is the nickname for a famous 15th Century cannon which resides on the ramparts of Edinburgh Castle overlooking the railway line as it heads out of Waverley station towards the Forth Bridge.
Thane of Fife is another name for the Earl of Fife, whose county the Aberdeen line passes through. This name was chosen by a competition in Boys Own paper, and was also used on Atlantic C11 No. 9871 which was withdrawn in January 1935.
Wolf of Badenoch was the nickname given to the 14th Century Earl of Buchan who burned down Elgin Cathedral in 1390 in a response to episcopal criticism.

Thank you to Dennis Butler for the side photograph of P2 No. 2001 Cock o' the North at the top of this page.

Thanks to Bob Anderson for the photograph of the cannon 'Mons Meg' at Edinburgh Castle.