The Manchester South Junction & Altrincham (MSJ&A) line ran from Manchester London Road to Altrincham, and was jointly owned by the LNER and the London Midland Scotland Railway (LMS). Electrical services were introduced on 11th May 1931 using the new 1500V DC system, and the MSJ&A was the first line to use this new electrical standard.

Although jointly owned, the multiple unit stock built for the MSJ&A were of LMS design and appearance. Twenty two three-car units and two spare motor cars were built by Metropolitan-Cammell Carriage & Wagon Co. Each unit consisted of a Driving Motor Brake Third, Trailer Composite, and a Driving Trailer Third. Units were fixed at three cars due to the regulations in place during the 1930s that limited propelled cars to two. A typical train consisted of two three car units running together as a six. No attempt was made to maintain the original fixed formations, and the spare motor cars were frequently used.

The livery was dark green with LMS-style black and yellow lining. Passenger accommodation was in the form of compartments, and no corridor was provided. Bodies were sheet steel on a wood frame, and these were mounted on 58ft underframes. 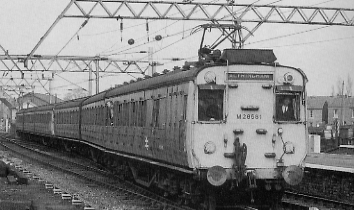 The Driving Motor Brake Thirds each carried four 328HP motors, and could run at 60mph. Each bogie had its two motors connected in series. The two bogies could then be controlled in series or parallel. Electrical equipment was housed in a housing behind the driver, with louvres to allow air-cooling of the resistors. These resistors were later moved below the underframes. This section of the car had a flattened roof that also housed the pantograph.

The multiple unit stock was stored in a depot at Altrincham on a site previously used by carriage sheds.

Driving Trailer No. 57 was written off after a collision in 1948. No. 153 was taken out of storage and rebuilt by adapting one end compartment into a driving cab. Re-numbered as No. 74, this vehicle was unique with eight compartments and seating for 96. No diagram was ever issued specifically for this variant.

During the 1950s, British Rail adopted a new electrical standard of 6.25KV/25KV AC. The Oxford Road section adjacent to the Crewe line, was converted to 25KV between 1958 and 1960. The remainder of the line switched to 25KV in 1971. Stock reductions started in 1954 when six of the coaches were transferred to steam use. In 1966 with the imminent conversion of the complete line, stock was reduced to seventeen units and one spare motor. The conversion to 25KV required new overhead wiring, and the pantographs were replaced in 1968 to match the new wiring. The remaining MSJ&A units were given the new BR classification of 'Class 505' in 1968, but were finally withdrawn in May 1971 with the switch to 25KV. They were replaced by Class 304 electrical multiple units.

Two MSJ&A cars have survived. These are both intermediate trailers Nos. 29666, & 29670 (ex- 117, & 121). They are owned by the Altrincham Electric Railway Preservation Society (AERPS), and are currently located at the Midland Railway Centre.

A third intermediate trailer, No. 28663 (ex- No. 114), was purchased by the Derby Museums for the abortive Midland Railway Project during the 1970s. This was stored outside at Swanwick Junction and deteoriated to the point that restoration was not practical. The AERPS stripped a variety of parts from the coach in June and July 2006 for use in the restoration of Nos. 117 & 121. The coach was scrapped shortly afterwards, with the bogies going to the Historic Carriage and Wagon Department at Swanwick Junction.

I am not aware of any models of the MSJ&A rolling stock.