The Liverpool Street to Shenfield Route AM6 (Class 306) Stock 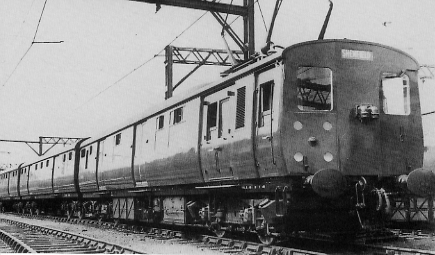 The LNER started to electrify the Shenfield to Liverpool Street line during the 1930s. Civil engineering work had started before the outbreak of World War 2, but the war delayed completion until 1949. The stretch from the new maintenance depot at Ilford and Chadwell Heath opened on 23rd March 1949, and the remainder of the line opened on 26th September 1949. The route was also extended to Chelmsford in 1956. The line was built using the standard 1500V DC overhead system.

In addition to English Electric control equipment, the stock used 210hp Crompton Parkinson traction motors. Birmingham Railway Carriage & Wagon Co. built the driving trailers, and Metropolitan-Cammell built all of the other cars. Each car side was fitted with two pairs of air-operated sliding doors. The bogies were based on a Thompson design, and had a design speed of 75mph. Electro-pneumatic brakes were also fitted. The driving cars had a lowered roof underneath their pantograph.

A five lamp route indicator was positioned below the offside window on the front. Different corner lamp combinations indicated different destinations, whilst a central red light acted as a rear light. 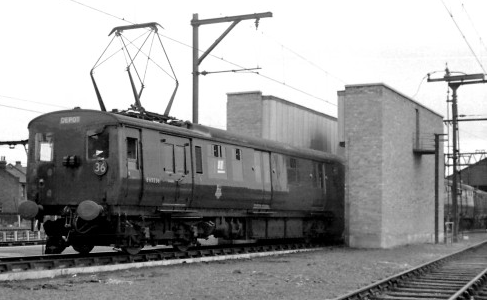 There is some evidence that six of the units were built before the start of World War 2. These were stored in the Midlands without traction motors, generator sets or other electrical equipment; and painted blue and cream. This livery was re-discovered when Unit 06 was damaged in a collision in Ilford Car Sheds. Construction of the remaining cars began after 1945, and the first deliveries were made in March 1949. The post-War copper shortage was such that many units were delivered without traction motors, and these were retro-fitted at Ilford. The intermediate trailers were intended to have both first and third class accommodation. However, the Ministry of War Transport abolished all first class transport on suburban London services in 1941, and the trailers were built with only third class. The Glossop driving trailers had a door between the cab and passenger saloon. This was omitted from the Shenfield driving trailers, to allow extra seats to be fitted for the busy Liverpool Street services.

British Rail switched from the 1500V DC standard to a mixed 25KV AC and 6.25KV AC system during the mid-1950s. The lower 6.25KV was intended for sections with low clearances. By splitting the onboard transformer into four equal sections, it was simple to switch between the two different input voltages. The Shenfield line was converted to the dual AC system between 4th and 6th November 1960. The ex-LNER Shenfield stock was also converted to use the new AC system, and continued to operate the Liverpool Street to Shenfield line and its extension to Chelmsford. The conversion required the fitting of a transformer and a germanium rectifier. The power cars had insufficient space, so these were fitted beneath the intermediate trailer. This required the movement of the pantograph from the power car to the intermediate trailer. Stone-Faiveley pantographs also replaced the original diamond pantographs. The removal of the pantographs from the power car, meant they could be fitted with full length full height roofs.

At about the time of this conversion, British Rail classified the Shenfield stock as AM6. During the 1968 re-classification, they became Class 306.

The first withdrawal was in December 1968 after unit 030 experienced a fire earlier in the year. Driving trailer 65604 was badly damaged in a collision in late 1974, and 65459 was destroyed by fire at about the same time. The remaining four cars from these two units were re-formed to make one complete unit and a spare driving motor. Regular withdrawals started in 1980 and were completed in 1981.

Only one of the Shenfield AM6 units has survived into preservation. No. 306017 has been preserved into a near-original green livery with modern yellow warning panels. It is currently located at Shildon Locomotion Museum.

Bill Bedford sells a 4mm scale kit for the Shenfield AM6 units.

Thank you to Mike Morant for the photograph of the Shenfield stock being used in a demonstration of the new Ilford washing plant.

Thank you to Charles Philips and Ernst Birchler for information on the six units built before World War 2.