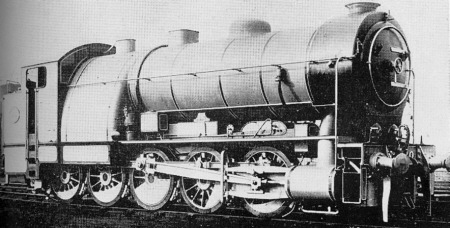 In the early 1900s, the Great Eastern Railway (GER) was threatened by the City & North Eastern Surburban Electric Railway - a scheme for an electric railway which would compete with the GER's lucrative commuter traffic. In order stop this proposal in Parliament, the GER's Management ordered James Holden to produce a locomotive that could compete with an electric railway. The locomotive had to accelerate a 300 ton train to 30mph in 30 seconds. The 0-10-0T No. 20 'Decapod' was Holden's response to this challenge. In tests, the Decapod appears to have met the acceleration goal, and the electric scheme was defeated.

The Decapod was the first ten-coupled locomotive to run in the UK. With its large diameter boiler and wide fire grate, the Decapod presented itself as an imposing locomotive that filled the loading gauge available. In order to generate the required tractive effort, Holden fitted the Decapod with three cylinders. The boiler ran at 200psi - a very high boiler pressure for the time period, and was protected with a total of six Ramsbottom safety valves. The distinctive firebox shape with a wide firegrate would become a familiar sight on such locomotives as the Gresley A1 Pacifics, but the Decapod was almost the first UK locomotive built with this feature: Ivatt's C1 Atlantic was introduced only months before the Decapod.

The use of three cylinders was also unusual at the time, although it was first used by Stephenson in 1846. Holden's design used three cylinders spaced at a balanced 120 degrees. The central cylinder drove the second axle and avoided interfering with the leading axle by using a fork arrangement on the connecting rod. This enclosed the leading axle which was cranked by 3.5in and rotated in synchrony. Holden patented the arrangement, although it does not appear to have been used on any other locomotives.

The long coupled wheelbase was accommodated with 0.5in of side play on the rear driving axles. The coupling rods accommodated this play with ball and socket joints.

The Decapod trials took place from February to June 1903 at Chadwell Heath using a special plant that allowed electric recordings of the actual rate of acceleration. Initial trials showed a tendence for priming. This tendency was fixed with alterations to the internal steam pipe. By this time, most of the running plate had been removed to allow access to instrumentation fitted for the tests.

In the final trial, it was widely reported that the Decapod managed to haul 335 tons from a dead start to 30mph in just under 30 seconds. The load consisted of eighteen four wheel coaches loaded with pig iron.

Later research by Dr W.A.Tuplin in 1960s, and more recently John Gardner of the Great Eastern Railway Society, have found that this is unlikely to have been the case. There is some evidence that the Stratford designers did not take into account the effects of train resistance, locomotive friction, and the variation of effective steam pressure in the cylinders with varying speeds. Remarkably few records of the trials have survived. Tuplin argues that the Decapod could not have reached the acceleration target unless the coaches were empty and the boiler was increased to 250psi. Despite the few records, it is unlikely that the boiler pressure was increased this much without it being recorded. Gardener notes that the train weight of 335 tons probably included the locomotive weight (80 tons), hence the Decapod could have reached the acceleration target as-built, but only if the coaches were empty. Due to the coaches returning to traffic between the Sunday trials, it would have been very easy to run the train without the weights and without anyone noticing that they had been removed. Although this is the most likely explanation, it will probably always remain a mystery as to whether the real trial results were deliberately suppressed or not.

The Decapod's trials were sufficient to defeat the City & North Eastern Surburban Electric Railway Bill, and the Bill's supporters do not appear to have questioned the results of the Decapod trials.

C.J.Allen implies that the GER management did consider developing a production version of the Decapod but it was dropped due to the combined axle loadings and insufficient traffic growth. Although the individual axle loading was not too high, it was closely spaced. This high axle load in a short length would have required significant bridge strengthening on the lightly built GER. The GER was not seeing an increase in traffic that could have warranted such an investment.

There was a proposal for a similar 0-8-0T (Drawing 12367), dated 28th November 1903. The locomotive would have weighed 58.5 tons, have a boiler pressure of 180psi, and provide a tractive effort of 22,200lb. The drawing is more detailed than most proposal drawings, so it appears to have been a serious consideration. Despite being created only a few months after the Decapod trial, basic power calculations on the drawing also fail to take into account the effects of train resistance, locomotive friction, and steam pressure variations. Therefore the estimated speed of 19.4mph with a 320 ton train after only 30 seconds from stationary, is an over-estimate.

In May 1904, the Drawing Office was instructed to rebuild the Decapod as an eight-coupled tender goods locomotie. Although orders were given in June to carry out the work, nothing had been completed by the end of 1904. In December 1904, orders were given to convert the boiler for stationary use at the Stratford Carriage Department Smithy at Stratford. The Decapod was finally rebuilt as an 0-8-0 freight tender lcomotive in 1906. The rebuilt locomotive was the only eight-coupled locomotive to serve with the GER. It had unequally spaced wheels with a wheelbase of at least 23ft 6in. The new locomotive only had two cylinders of 18.5in diameter which were placed in a forward location fed by two large steam pipes. The new locomotive operated at 180psi and weighed a modest 54.5 tons.

As a non-standard, ungainly locomotive, the rebuild Decapod only lasted seven years and was scrapped in 1913.

Thank you to Paul Goldsmith, Vice President of the GERS and former Great Eastern Journal editor, for providing me with some of the above information and a copy of John Gardner's article.