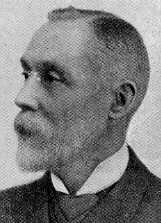 James Holden was born in Whitstable, Kent in July 1837. Holden served a six year apprenticeship under his uncle Edward Fletcher with the York Newcastle & Berwick Railway. In 1865 he joined the Carriage & Wagon Department of the Great Western Railway (GWR). From November 1870 to June 1873, he was the superintendent of the Saltney Works of the Shrewsbury & Chester Railway (then a part of the GWR). Eventually he was promoted to the position of Chief Assistant to William Dean at Swindon, before becoming the Locomotive Superintendent at the GER in July 1885 succeeding T.W. Worsdell.

Holden developed T.W. Worsdell's designs, but also incorporated a high level of standardisation. Many parts on his locomotives were interchangeable. During his later years in office, his designs were depended greatly on the work of Frederick V. Russell who eventually became the Chief of Locomotive Design.

Holden's most famous design is that of the handsome Claud Hamilton 4-4-0, many of which survived into BR ownership. As well as pioneering the burning of oil fuel, Holden also built the famous 0-10-0T well-tank "Decapod". This was designed to compete against proponents of electrification, and successfully exceeded a specification of accelerating a load of 300tons to 30mph in 30 seconds. This had small wheels, large boiler, and three cylinders. Unfortunately, it was too heavy to enter regular service and was converted to a 2 cylinder 0-8-0.

As a Quaker, Holden looked after his enginemen by erecting London's first hostel for railwaymen in 1890, and designing locomotives with relatively comfortable cabs.