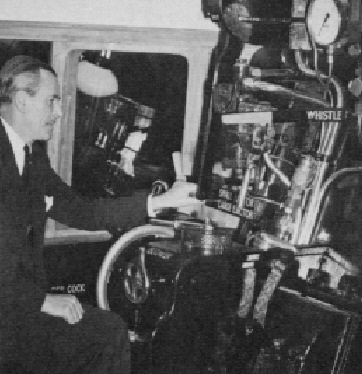 Robert A. Riddles was born on 23 May 1892 and entered an apprenticeship with the London & North Western Railway (LNWR) in 1909, before serving with the Royal Engineers in France for most of World War 1. He returned to the LNWR in 1919, and was promoted to the position of assistant to Stanier in 1933. In this position, Riddles was responsible for much of the design work of Stanier's famous Coronation Class Pacific. Riddles and Stanier developed a close relationship, and there is little doubt that this was of a great benefit to LMS locomotive design during the 1930s.

During World War 2, Riddles headed the Directorate of Transport Equipment. One of this Directorate's tasks was to design and supply railway locomotives for war service. Whilst at the Directorate, Riddles designed three very able 'Austerity' designs: the Hunslet-based 0-6-0ST (LNER J94), the WD 2-8-0 (LNER O7), and the WD 2-10-0. These were designed to be cheap and easy to build and maintain, and to burn indifferent coal. The 0-6-0ST also proved powerful for its size, and particularly talented at hauling freight over poor quality track. All three designs were used extensively in the UK and in Continental Europe. The LNER made great use of the J94 and O7 both during and after hostilities.

With Nationalisation, Riddles was appointed Mechanical Engineer with the newly formed Railway Executive. He envisaged that Britain's railways would use electric traction in the long term, with steam traction in the intermediate. Hence, he set about designing and building a set of 12 standard locomotive designs, usually referred to as the "BR Standards". Officially these incorporated the best practices of all of the "Big Four" railway companies, but their resemblance to LMS designs has often been noted. They were designed for simplicity, ease of maintenance, and the ability to burn poor quality coal. Although success varied from class to class, as a whole the BR Standards were generally a success. The 9F "heavy freights" were particularly successful. Although capable of the slow heavy freight haulage to be expected of Britain's most powerful steam engine, they were also capable of 90mph running.

The Railway Executive was abolished in 1953 and Riddles took this opportunity to retire. Not long afterwards, British Railways decided on a plan of rapid conversion to diesel traction. Many of the planned orders for BR Standards were cancelled, with only 999 being built. Most were scrapped with many decades of useful future life left in them.