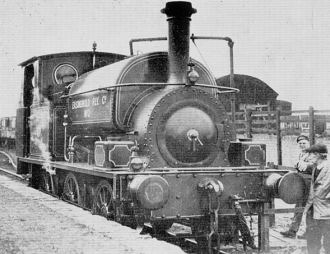 The Easingwold Railway was a privately owned standard-gauge railway in the Vale of York that ran from Alne Station on the East Coast Main Line to the village of Easingwold. At 2.5 miles long, the Easingwold Railway prided itself as "England's Shortest Standard Gauge" but was also locally known as the "T'Awd Coffeepot".

As a significant agricultural market town in the Vale of York, Easingwold recognised the need for a railway connection at an early date. The first attempt was made in 1836 when Easingwold attorny, Robert Gill, attempted to get the Great North of England Railway Act's York - Darlington line to pass through Easingwold. This was the first of various schemes to fail in the period 1836-1864. The final scheme was proposed in 1880 with a letter from Mr F.E.Rookledge to the Yorkshire Post and Intelligencer that proposed a branch line from Alne on the NER's East Coast Main Line. This caused a number of leading landowners and residents to get together over the next few years, resulting in the Easingwold Railway Act of 1887 and the incorporation of the Easingwold Railway Company on 23rd August 1887.

After funding was secured, construction was contracted to the ominously named Death & Co. This company failed during construction, and a second unknown contractor completed the railway in the summer of 1891. The official opening day was Saturday 25th July 1891, and appears to have been a large event for the residents of Easingwold.

Early passenger services consisted of nine daily trains each weekday in each direction. At first, third class tickets were issued on all trains, although in 1893 this was reduced to first and last trains only. Third class 'Cheap Day Return' tickets were issued for Saturday services during the 1920s. This was accompanied with a weekday reduction of services to eight daily trains in 1921, and six in 1927. World War 2 led to further reductions and by October 1946 there were only return trips a day. Passenger services finally ended on 29th November 1948.

Unlike most light railways, the Easingwold Railway was profitable for most of its life. Although it made a loss in its first year, it was turning a profit by 1893. By 1920, the Easingwold was paying a regular dividend of about 3-4% before road competition began to affect railway traffic. A 1% dividend was paid in 1931 - the last dividend until World War 2. Heavy war time traffic resulted in high traffic levels and a dividend of 3% was paid in 1943. This would have continued, except the track was wearing out and it was completely renewed in 1944-5.

Unfortunately the end of the war and the resulting drastic reduction in traffic quickly led to losses. In 1947, the Easingwold lost £1,078. Profitability was not helped by the need to hire locomotives to replace No. 2. Cost reductions and a levelling off of traffic declines during the 1950s was enough to keep the railway running, but not to turn a profit. By 1956, the total deficit reached £12,245 with annual losses of £1,500-2,000. Talk of early closure began in September 1957, and the last train left Easingwold on Friday 27th December 1957. Hauled by J72 No. 68698, the train carried several wagons of sugar beet, and the 4-wheel van with the Directors, General Manager and various passengers. These passengers included two who had travelled on the Easingwold Railway's opening train 66 years earlier. 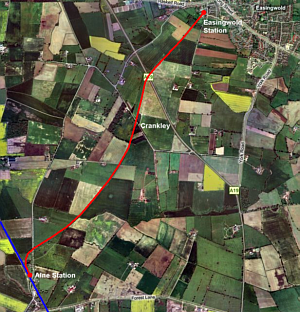 The Easingwold Railway was short at only 2.5 miles long and with two stations.

The line started at a bay on the northern end of the Up platform of Alne Station. A water column was located on the bay platform, but this was removed during the 1930s. The Easingwold's Alne Junction also included a passing loop and long siding. The NER also had a small goods yard on the opposite side of Alne Station. A crossover allowed Easingwold locomotives to reach this yard, although the crossover was moved during a re-modelling in the 1930s.

A single siding was located at the Crankley level crossing. This siding was rarely used and was typically locked.

Easingwold Station was the largest of the two stations, and included four sidings, a passing loop, and the engine shed. The sidings included coal drops and a 'Goods Wharf'. The engine shed is noted as being particularly small, measuring approximately 36ft long and 15ft 6in wide. Construction was brick with a pantile and glass roof. The shed was large enough to hold the Easingwold's own locomotives, but locomotives on loan from the LNER and BR (J71 and J72 0-6-0Ts) were at least a foot too tall. These engines had to sit in-front of the shed, covered in a tarpaulin.

During its history, the Easingwold Railway owned a total of three different locomotives.

The original locomotive was Hudswell Clarke 0-4-0ST Works No. 342 which was purchased new on 24th June 1891. This had 10x16in cylinders and 2ft 9in wheels on a 5ft 6in wheelbase. Livery details are unclear, but it was probably finished in Hudswell Clarke's standard 'Midland Red' livery with yellow lining. No. 342 was found unsuitable and was quickly returned to Hudswell Clarke. No. 342 may have been too small for the traffic, but there is some evidence that the Board of Trade objected to the use of an 0-4-0T. No known photographs survive.

Hudswell Clarke replaced No. 342 with the inside cylinder 0-6-0ST Works No. 334 on 20th August 1891. This locomotive was named Easingwold and carried a maroon finish with brass nameplates. It had 12x18in cylinders and 3ft 1in wheels. Easingwold hauled all of the railway's traffic until it was sold to the Ponteland Light Railway in 1903.

The third locomotive was Hudswell Clarke Works No. 608 which was supplied on 7th May 1903. This was to a standard 0-6-0ST design, but it was more powerful than Easingwold with 13x20in cylinders and 3ft 3.5in wheels on a 11ft 6in wheelbase. The inside cylinders had Stephenson valve gear. Gravity sanding and steam heating were also fitted. This locomotive was also painted maroon and carried the number 2. No. 2 is the locomotive most closely associated with the Easingwold Railway and is illustrated above.

On at least three occasions, No. 2 returned to Hudswell Clarke for overhauls or repairs. The first occasion was during the summer of 1911 when No. 2 acquired a new livery of black with a single red line. The elderly 0-6-0ST Trent was loaned to the Easingwold when No. 2 returned to Hudswell Clarke for rebuilding in September 1924. Trent was also recorded on the Aberford Railway. Trent tended to run with a hot axle box and was unpopular at Easingwold. No. 2 acquired a new livery of maroon lined in yellow and vermilion on its return from a third overhaul in the early 1930s.

In January 1947, No. 2 was sent to Darlington requiring a new boiler and firebox. The cost of repairs were estimated at £1,400, and a replacement locomotive was recommended. No. 2 was finally scrapped in the winter of 1948-9. One of her maker's plates has been preserved in the National Railway Museum.

No other locomotives are known to have worked on the Easingwold, and no diesels are believed to have passed on its tracks.

The Easingwold Railway initially used two ancient 26ft four-wheeler coaches purchased from the NER. These were retired in 1903 and used as stores for goods traffic at Easingwold. They were replaced by three ex- North London Railway four-wheelers. Two were composites, and the third was a guard and luggage van. When retired in 1920, two of these coaches were also used as sheds at Easingwold.

These were replaced by two NER six wheelers painted brown with yellow lettering. These coaches had their central axles removed for running on the Easingwold Railway. Both coaches were replaced by a single 6 wheel coach during the 1930s. This coach was to a similar design, but the central axle was retained until about 1937.

This single ex-NER coach was retired in about 1946 when it was replaced an ex-CLC 6-wheel coach that was built to a GCR design. Passenger traffic ceased in 1948, and this last coach was used for parcels traffic until 1956 when it was replaced by a van borrowed from BR. This coach (No. 1470) has been preserved and can be found on the Chasewater Railway.

The Easingwold Railway never owned any goods wagons, and these were always supplied by the NER and its successors.