The North British Railway (NBR) started to consider superheating in October 1910, and in February 1911 decided to fit superheaters to the last two members of the final batch of D29 'Scotts'. The superheaters were of the 18-element Schmidt type. Reid also moved piston valves above the cylinders, resulting in a higher boiler pitch. Rocking shafts were fitted to operate the piston valves in their new position. Although the NBR continued to classify these engines as 'Class J', the LNER gave them the separate classification of 'D30'. The names continued to follow the Sir Walter Scott theme, and the locomotives are often known as 'Superheated Scotts' or just 'Scotts'.

The initial two prototypes (LNER D30/1) were followed by twenty five production locomotives (LNER D30/2) built in three batches between 1914 and 1920. These engines replaced the 18 element Schmidt superheater with a 24 element Robinson superheater. The number of boiler tubes was also reduced, and the diameter of the piston valves were increased from 8in to 10in. The D30/2 in this form, represented the final development of Drummond's 'Abbotsford' 4-4-0 design.

Both superheater types had pyrometers fitted to measure the degree of superheating. The LNER would remove these after Grouping (1923). 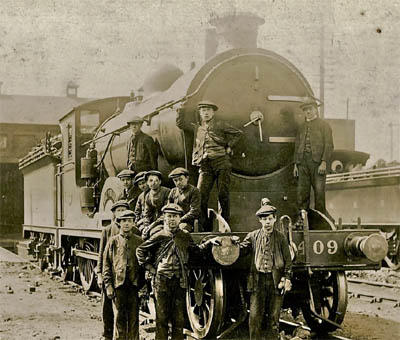 Doncaster started to design a significant rebuilding of the NBR 4-4-0s in 1939. This was stopped during World War 2, and was never restarted.

The two D30/1s were allocated to St. Margaret's shed for most of their lives, and they were initially used on the non-stop expresses between Edinburgh and Carlisle. The D30/2s were introduced shortly after these services were stopped, but they were put to work on express passenger services over all of the NBR's main lines. Of particular note during this period, were the Carlisle to Perth 'Jellicoe' naval leave trains which were usually hauled by two D30 Scotts.

During the early 1920s, the D30/2s were allocated to Haymarket (6), Dundee (6), Eastfield (5), St. Margaret's (3), Perth (2), Thornton (2), and Carlisle (1). The D30s continued to work main line services during the 1920s. Duties included the Glasgow - Edinburgh expresses, and main line connecting services to the Flying Scotsman. The D30s continued to give good performance on these services which tended to be tightly timed.

By the 1930s, new locomotives such as the D11 'Improved Directors' and D49 'Shires' displaced many of the 'Scotts' to lesser duties and sheds. The D30/2 allocation became: Haymarket (7), Thornton (5), Dundee (4), Eastfield (3), Perth (2), Hawick (2), Aberdeen (1), and Carlisle (1). Most of their work involved secondary passenger services, although they sometimes hauled express trains - especially as pilots.

The tendency of the D30s moving to lesser duties and sheds continued into the 1940s. Although the first three D30s were withdrawn between 1945 and 1951; the last batch of boilers was built in 1946, and the last D30 received a new boiler in 1951. Despite the introduction of large numbers of Thompson B1s, withdrawal of the remaining 'Superheated Scotts' did not restart until 1957. The withdrawals were quick and the last superheated Scott was withdrawn in 1960.

The last D30 was withdrawn in 1960, and none have survived into preservation.

Both Gem Loco Kits and PDK Models sell 4mm scale (OO gauge) kits of the D30. The GEM kit is a recently re-introduced whitemetal kit with a new chassis etch. Crownline have also produced a 4mm scale kit of the D30, but this is o longer available.

Reid re-introduced the policy of renaming NBR locomotives, and both the D29s & D30s were given names associated with the literary works of Sir Walter Scott. This theme resulting in both classes being known as the "Scotts".

Thank you to Alex Kean for the photograph of No. 9409 The Pirate at Eastfield. This features Alex's father sitting on the footplate (2nd from the left).