The F4 and F5 2-4-2T tank locomotives had a mixed history. T.W.Worsdell introduced the 2-4-2T type to the Great Eastern Railway (GER) in 1884 from his previous employer, the London & North Western Railway (LNWR). These GER Class M15 (LNER F4) locomotives were designed for working branch and suburban passenger services. Known as "Gobblers" due to their excessive fuel consumption, they were not a great success and many were withdrawn before Grouping in 1923.

Most of the F4s and F5s spent their lives working the London suburban services, until being replaced by N7s. They then hauled services throughout East Anglia, although three F4s were moved to Scotland in the 1930s. When working the Fraserburgh to St. Combs branch, these would be fitted with cowcatchers. Two of these were fitted for push-pull working in 1941, using the standard LNER vacuum push-pull gear.

Between 1940 and 1943, fifteen F4s and one F5 were loaned to the military for hauling armoured coastal defence units. These were allocated to various towns all the way from Canterbury to Aberdeen. 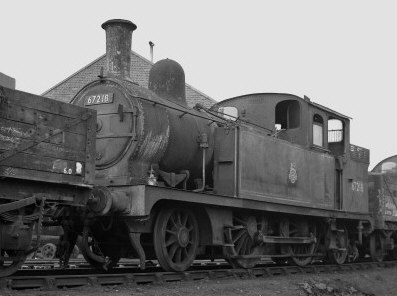 With withdrawals of the original T.W.Worsdell M15s starting in 1913, only 118 F4s and 30 F5s entered LNER ownership at Grouping in 1923. The LNER quickly withdrew the remaining F4s built during T.W.Worsdell's tenure. With the withdrawal of the last of these in 1929, a start was made on the James Holden / S.D.Holden F4s. The last F4 was withdrawn in 1956. The F5s lasted longer but were quickly withdrawn between 1955 and 1958.

Finney and Smith produce 3mm scale kits of the F4 and F5.

Connoisseur Models sell a kit of the F5 for 7mm scale (O gauge).

Thank you to the P.H. Groom collection for permission to use the above photograph of F5 BR No. 67195.

Thank you to Malcolm Peirson for the photograph of F4 No. 7233.

Thank you to the Mike Morant Collection for the photograph of F5 No. 67218.