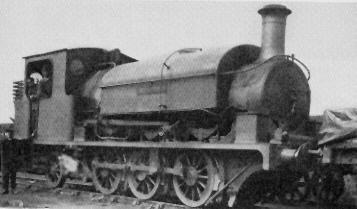 The locomotives of the East & West Yorkshire Union Railways (E&WYUR) were taken over by the LNER on 1st July 1923, and consisted of four 0-6-0STs (J84s and J85s), and two N19s. All six locomotives were built by Manning Wardle & Co. The first 0-6-2ST, No. 4, was delivered in September 1898. No. 4 was followed by Nos. 5 & 6 which were delivered by June 1899. These had small changes from No. 4, including cast steel support brackets for the boiler and motion, circular cab front windows, and opening cab windows.

The trailing wheels had a steadying effect which proved very useful on the steep gradients of the E&WYUR, but they also resulted in poor adhesion. Hence in 1919, No. 4 was rebuilt as a J85 0-6-0ST. Nos. 5 & 6 both survived into LNER ownership as 0-6-2STs. At the time of the take-over, No. 6 had a cracked frame and was immediately scrapped. No. 5 was renumbered as No. 3115 after a general repair at Doncaster Works in 1924.

To cope with the tight curves on this line, the radial wheels could move laterally by 4in on each side. Therefore, the rear ends of the frames were set in by 4.5in for clearance. The springs above the rear trailing coupled wheels had a noticeable slant, in order to clear the front corners of the firebox casing. Mechanical lubricators and gravity sanders were fitted before 1923.

The N19s spent their entire lives working the E&WYUR's double track main line from Lofthouse to Stourton. This line had single track branches from Robin Hood to the collieries of Newmarket, Thorpe, and Beeston. The N19s were particularly well suited to this demanding line, and the LNER was hard-pressed to find a good alternative. The last N19, No. 3115, was finally withdrawn in March 1928.

The N19s did not survive into preservation, with the last engine being withdrawn from service in 1928.

I am not aware of any models of the N19 tank engines.