The Class B 0-6-2Ts were quickly followed by the Class C (LNER J21) locomotives of which large numbers were built with compound expansion. Over time the NER found that compounding was not living up to its promise. In the early 20th Century, Wilson Worsdell converted the Class B and Class C locomotives to simple expansion. This process started with the Class Cs, and the Class Bs were converted between 1902 and 1912. Rebuilds occurred only when new cylinders were required, resulting in a number of different cylinder and valve arrangements. The first three rebuilds employed 18x24in cylinders and Joy valve gear. Twelve compounds and one of the original simples were modified with 19x26in cylinders and piston valves operated by Stephenson's valve gear. Twenty one compounds and three simples were rebuilt with a hybrid using 19x24in cylinders, Stephenson's valve gear, and piston valves. This variation avoided the need for a new crank axle. This left fifteen compounds which were eventually rebuilt like the original three. Between 1918 and 1922, six of the Joy valve locomotives were rebuilt with 19x24in cylinders and piston valves with Stephenson valve gear. 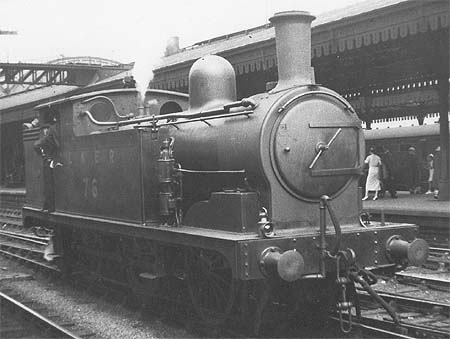 The same boiler type was used on the J21, J25, N9, and N10 locomotives; and boiler swaps were common.

The N8s were built for medium distance goods and mineral trains, and were quickly put to work on these duties. In the late 19th Century, their most notable work was between West Auckland and Tebay over Stainmore Summit. The N8s replaced Stockton & Darlington designed long-boiler 0-6-0 engines on this 101 mile round trip. As would be expected, their coal consumption was much better than the long-boiler 0-6-0s. During trials, the compound N8s also proved superior to the simple N8s, although this dropped significantly for short runs and shunting.

Another early working involved mineral trains from sidings to port, e.g. Stella Gill to Tyne Dock; Bishop Auckland to Sunderland; and Selby to Hull. Between 1894 and 1909, large numbers of J24s, J25s, and J26s were built, displacing the N8s to local and trip goods workings. A third of the N8s were allocated to the Hull area for these duties.

The N8s were quickly recognised as being very suitable for passenger branch services, and continuous brakes were fitted to many of the locomotives from 1899. Despite this, the continuously braked locomotives were mainly used for braked goods workings and empty coach workings, rather than actual passenger services. It was only after Grouping (1923) that they would be often used on the heavier branch passenger workings.

The last N8 was withdrawn in 1956, and none survived into preservation.

Gladiator sell a (ex-Fourtrack) kit of the N8 for 7mm scale (O gauge).

Thank you to the Rosewarne family for the photograph of LNER No. 76.