On arriving at the North Eastern Railway (NER), T.W. Worsdell found an urgent need for goods locomotives. The NER required goods engines that were more powerful at a time when the earlier NER goods engines were due for withdrawal. The most recent NER goods engines were the unsatisfactory McDonnell '59' Class (LNER J22). T.W. Worsdell had recently designed the successful J15 goods locomotive for the Great Eastern Railway (GER), and his new design for the NER, the Class C (LNER J21), had a number of external similarities. They were more powerful than the J15s, and they were fitted with large comfortable cabs that were noted for their convenience. The new J21s also had similarities with the earlier Fletcher goods engines, but the J21s represented a significant step forward with their larger cylinders and fireboxes.

A total of 201 J21s were built between 1886 and 1894, of which 171 were C compounds and 30 were C1 simples. All construction was in batches of ten, with the exception of the prototype compound locomotive (NER No. 16). Gateshead constructed the bulk of the J21s, although Darlington built three batches after 1890.

T.W. Worsdell retired in 1890 due to ill health, but stayed with the NER as a consultant for two years. He was succeeded by his brother W. Worsdell, who had a dislike of compounding. W. Worsdell had a free hand by 1893 and he re-ordered the last two batches of J21s to be built with simple expansion. He was not an advocate of Joy valve gear either, but the required valve gear had been pre-ordered, so this was used for the final J21s. Further construction of NER goods engines would be to W. Worsdell's own designs starting with the Class P (LNER J24) locomotives.

It appears that day-to-day operations did not realise the initially reported coal savings. As early as 1893, the Locomotive Committee requested a report from W. Worsdell regarding the working of the NER's compounds, including coal consumption and failures to start and stop. After considering the report, the Locomotive Committee decided in 1894 to consider conversion of all compounds to simple expansion. Priority was given to the passenger compound locomotives, and it was not until 1901 that the first of the Class C locomotives was rebuilt. Eventually all of the Class C compounds were rebuilt as C1 simples with the last being rebuilt in 1913. From June 1914, the entire class became known as simply "C".

Most of the rebuilds used 18in x 24in cylinders and Joy valve gear to match the existing simple locomotives. However, 75 J21s were rebuilt using larger 19in diameter cylinders, Stephenson valve gear, and piston valves. Three of the original simple C1 locomotives were also rebuilt like this. 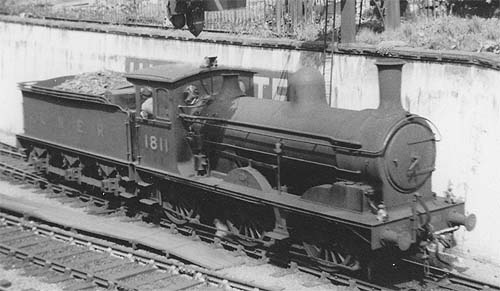 The chimneys were also modified during the late 1930s. During the mid-1930s, some of the J21s were allocated to the GE Area. Drawings were issued to bring the J21s within the GER loading gauge at the end of 1937, however this was issued shortly after the J21s returned to the NE Area! In 1939 with war looking a real possibility, it was envisaged that J21s may well be required to work in the GE Area, and between 1939 and 1942 most of the remaining J21s were cut down to the GER loading gauge. In most cases, this simply involved a change of chimney.

In common with many LNER locomotives built during this era, the J21s were built with Ramsbottom safety valves but would later receive Ross pop safety valves. The Ross pop valves became a standard J21 fitting before Grouping (1923), but some of the J21s managed to keep their Ramsbottom valves until after Nationalisation (1948). 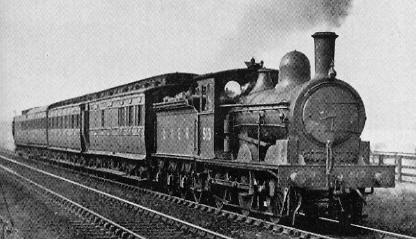 The J21s were originally built for mineral trains, so only the last thirty were built with any form of train brake. Twenty of these were fitted with Westinghouse brakes, and ten were dual-fitted. However, the J21s saw widespread use on passenger and mixed-traffic work, so it was natural that many more J21s would receive train brakes. By Grouping (1923) only 65 continued to have only steam brakes; 19 were dual fitted; and 117 had Westinghouse-only fittings. With the adoption of vacuum braking by the LNER, 136 J21s received vacuum brakes between 1928 and 1931.

In 1938 there was a proposed plan to rebuild the J21s used on the Darlington-Tebay route. The rebuilds would have used 19x26in cylinders with 8in piston valves, Stephenson valve gear, new crank axles, new frames, and new boilers. The valve gear would have used parts from the D20 4-4-0s and J39s. The frames would have been based on the J39 frames but keeping the J21 wheelbase. The new boiler would have had an operating pressure of 200psi, a diameter of 4ft 6in, and a 12in longer firebox. It would have also been fitted with an 18-element Robinson superheater. The tractive effort was estimated to be 26,060lb, and the axle loading would have been 16 tons. In other words, the end result would have been a powerful locomotive with a notably low axle loading.

The J21s were arguably one of the most successful of the NER's locomotive classes. They were a ubiquitous feature of the NER scene and at Grouping, 10% of the NER's locomotive stock consisted of J21s. The class count remained at its peak of 205 for 34 years. Even after withdrawals started, they survived in service another 33 years - surviving a major trade depression, a world war, and Nationalisation.

One of the most significant of the regular J21 passenger workings, was the passenger services operated in the Tyneside area. They operated the intensive passenger service on the Newcastle to South Shields line until it was electrified in 1938. Sunderland also used them for passenger work which would later be considered to require large three-cylinder tank engines.

The J21s are particularly noted for their work on the Darlington to Kirkby Stephen line over Stainmore Summit. With increasing loads, the LNER tried to replace the J21s with D3 4-4-0s, D23 4-4-0s, and E4 2-4-0s. In order to cope with the vicious weather conditions found on the route, the LNER went so far as to fit rebuilt cabs to the D3s and E4s. Despite these trials and locomotive modifications, none of these classes survived more than five years on the route, and the J21s returned in 1944. Although they were now fifty years old, the J21s would successfully work this difficult route for another ten years.

During the above trials of the E4s over Stainmore in 1935, eight J21s were loaned to the GE Area and allocated at Norwich. By 1937 these had been transferred to New England (Peterborough), and over time migrated north via Retford, Boston and Doncaster. 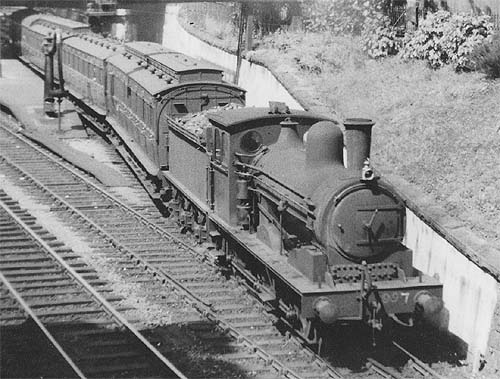 Withdrawals started in 1929 with No. 1339, and were slow but steady. Nineteen years later at Nationalisation (1st Jan. 1948), 83 J21s remained in service. With the introduction of diesels and their significant age, J21 withdrawals accelerated during British Railways ownership. Only five J21s survived into 1959, with the last J21s allocated to South Blyth, Tyne Dock, and Tweedmouth. The last J21, No. 65033, was withdrawn from service in April 1962. No. 65033 had actually been withdrawn on 22nd November 1939 as LNER No. 876, but due to wartime shortages had been repaired and returned to service! No. 65033 remained at Darlington for a number of years waiting for a scrap merchant. Luckily this allowed it to be preserved, and it is currently being restored to running condition.

The LNER sold four of the J21s to Harton Coal Co. (South Shields) between 1929 and 1935. These were used on the South Shields, Marsden & Whitburn Colliery Railway. The last of these was No. 869 (sold in 1931) which received a new boiler in 1951, became a spare locomotive in 1953, and was scrapped at some point after this date.

The following details are the standard LNER details. In reality, some of the saturated locomotives had 18x24in cylinders, flat valves and Joy's valve gear. This was added to LNER drawings from 1931. 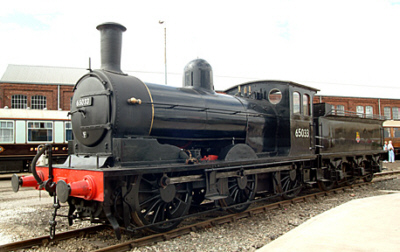 LNER No. 876 (BR No. 65033) has been preserved and until recently could be found at the Beamish Open Air Museum. No. 65033 is currently located at Locomotion, Shildon; awaiting funds to restore it to running condition.

The 3mm Society produce a kit of the J21 for 3mm scale.

Thank you to Robert Langham for the NER and Beamish J21 photographs.

Thank you to Geoff Byman FRPS for the photograph of J21 No. 65033 at the Doncaster 150 celebrations.

Thank you to the Rosewarne family for the photographs of LNER Nos. 997 and 1811.