The J38 0-6-0 locomotives were the first LNER group standard type, but only one batch of thirty five were built due to the advent of the more versatile J39 0-6-0 modification.

The history of the J38s dates back to October 1924 when the Joint Traffic & Locomotive Committee included 103 new 0-6-0 goods engines for the 1925-26 Build Programme. These were intended to be distributed between the Southern Area (48), North East Area (20), and Scottish Area (35). In November, the Southern Area requirement was replaced with the authorisation to buy 48 ex-ROD 2-8-0 (LNER Class O4) locomotives. The general construction order was placed on 4th March 1924, but the NE Area requirement was deleted in June 1925 before construction had started 1926. The deletion of the NE Area requirement, left an order for 35 locomotives for the Scottish Area only.

The general construction order referred to the new locomotives as "J27 Modified", although the J38s had very little in common with the J27s. One contemporary draughtsman at Darlington commented that the only similarity was the 0-6-0 wheel arrangement! Although a Darlington design, the Doncaster goods engine standard of 4ft 7.25in wheels were used. Axle journals were 8in diameter and 9in long, compared to the J27 journals which were 7.5in by 8in. The cylinders had Gorton-style dished piston heads and the Stephenson motion also followed Gorton practice, but the steam chest was of a Doncaster design with 8in diameter piston valves with 1.5in steam lap. The valve gear arrangement had much in common with the original A5 4-6-2Ts, and the full J38 arrangement of cylinders, piston valves and motion would be used on the improved A5 4-6-2Ts, and the J39 0-6-0s. It would also be used in a number of later rebuilds including the D11 4-4-0s, D16/3 4-4-0s, and J11/3 0-6-0s. 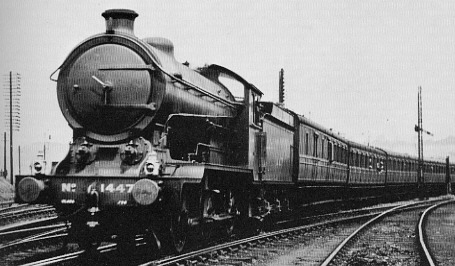 Compared to the J27, the J38's wheelbase was lengthened by 6in to accommodate a longer firebox (9ft). The grate area was also increased to 26sq.ft. The boiler diameter was kept the same but was positioned 8.2in higher so that it cleared the piston valves. All of the heating surface areas were increased but the working pressure was kept at 180psi.

In the early days, the J38s had a number of problems. Some of these were due to regional differences. The North British (NBR) men were not used to such things as the North Eastern (NER) steam reversing gear, and the pull-out regulator. The tender brakes were insufficient for the descending many of the steeper NBR lines with heavy coal trains. These problems would lead to many broken wagon couplings and draw-bars. The brakes were upgraded on future group standard tenders, and the NBR men learnt how to handle the J38's distinctive features. They became highly regarded as very strong locomotives. Their high coal consumption was made up for with their free steaming and high haulage capacity.

The J38 design was modified to have larger wheels. The resulting J39 design proved to be more versatile and was built in large numbers. No further J38s were built. 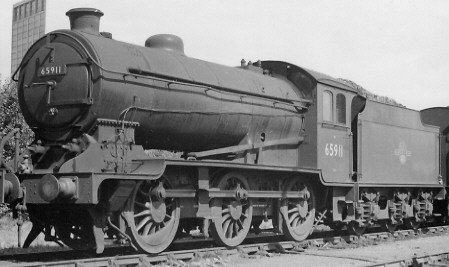 The J38s were used in Scotland for main line goods traffic, and for short distance mineral haulage from the Fife and Lothian coalfields to the Glasgow-Edinburgh industrial belt and the Scottish east coast ports. Initial allocations were mainly to Dunfermline (9), Thornton (8), and St. Margaret's (9). They were also allocated to Dundee (5), Stirling (2), and Eastfield (2). Stirling's two J38s did not stay long and in December 1926 one was moved to Dunfermline and the other to Dundee.

With the arrival of K2 2-6-0 and J39 0-6-0 locomotives at St. Margaret's in about 1930, the J38s were taken off the longer distance main line goods trains and used on coal trains between the Lothian coal field and the Edinburgh docks. Occasionally these engines were seen on the East Coast Main Line fulfilling the LNER's own coal requirements. Records exist of them reaching Doncaster and Retford, and they are thought to have occasionally reached Grantham and Peterborough as well.

Maintenance was usually performed at the Cowlairs Works, although there are recorded instances of J38s being repaired at Darlington. This appears to have been standard practice between 1931 and 1933 when 24 locomotives went to Darlington for repairs. From February 1955, Inverurie also performed some of the J38 repairs.

As well as being the first LNER group standard class, the J38 proved to be the last LNER class to remain completely intact. The first withdrawals started in December 1962 when Nos. 65923 and 65928 were withdrawn. The last two locomotives (Nos. 65901 and 65929) were withdrawn in 1967. These were the last Gresley locomotives to serve with British Railways.

The following details are for J38s fitted with the Diagram 97A boilers (as built). Later in their lives, J39 Diagram 97 boilers were often fitted instead. These were referred to as J38/2 and had a slightly smaller heating surface. See the boiler details on the J39 page for the exact boiler details.

Tender details are for the original tenders. Group Standard 3500 gallon tenders were fitted from 1931.

All of the J38 locomotives were scrapped and none have survived into preservation.

Barrett Engineering produce a kit of the J38 for Gauge 1 (10mm scale). This kit requires bolts and glue, and no soldering or machinery.

Thank you to the P.H. Groom collection for permission to use the above photograph of BR No. 65911.