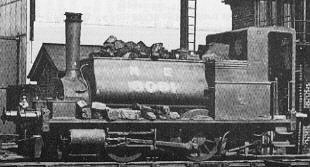 Eight of these small locomotives were built for the GER by Neilson & Co. The first four were built in 1874 for shunting in the goods yard at Devonshire Street and at Canning Town. Between 1894 and 1895, they were rebuilt with higher boiler pressures and cabs were added. Two pairs of new locomotives were built in 1897 and 1903 at the GER Stratford Works to this modified design. As well as the Devonshire Street and Canning Town duties, Y4s also shunted at Colchester, Lowestoft Harbour, and Stratford Carriage Works.

Four locomotives (the 1897 pair, and two of the originals) were withdrawn between 1911 and 1917, when replaced by the more powerful Y4. Thus four locomotives survived into LNER ownership. Of these four LNER locomotives, three were withdrawn between 1926 and 1931. No. 7230 survived as a shunter for the Stratford Carriage Works until 1948. During the 1930s it was kept in lined black livery, and attended many railway exhibitions in the former GER territory.

The original Neilson locomotives had small coal bunkers. These were extended with the addition of three coal rails. The Stratford locomotives had taller bunkers with only two coal rails. Despite this, coal storage was a problem for all of the Y5s. Hence, coal was usually stacked onto the running plate, and the distinctive flat top of the saddle tank (see above picture).

None of the Y5s which made it into LNER ownership survive today. However, GER No. 229 has been preserved in non-running condition. No. 229 was withdrawn from GER service in 1917, and was sold to the Admiralty for use at Beachley Dock near Chepstow. The Admiralty then sold it to the nearby Fairfield Shipyard, whose successors Fairfield-Mabey Ltd kept it for preservation. Originally located at the (now closed) North Woolwich Station Museum, it is currently at the Flour Mill awaiting restoration to running order.

Nu-Cast and High Level Kits both sell 4mm scale kits of the Y5. Stephen Poole also produced a OO gauge (4mm scale) kit, but this is no longer available.

ACE Products and Ragstone Models both sell kits of the Y5 for 7mm scale (O gauge).