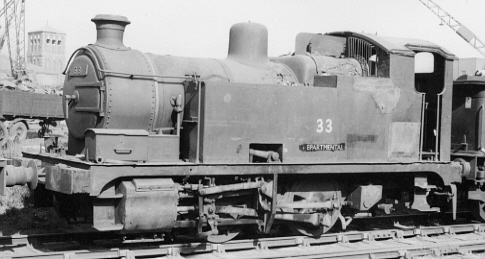 A.J.Hill built the first example of this class for the GER in 1913 for use at Canning Town to replace the smaller "209" (Y5) saddle-tanks. This engine was particularly powerful for its size at the time. Four further locomotives were built over the next ten years. These latter four were to a cut-down size for working in the Bethnal Green area. In 1931 the first locomotive was also cut down in size to be uniform with the other class members. All five members of the class spent their working lives in the Stratford area: Canning Town, Devonshire Street, Mile End Yard, etc.

Instead of a rear bunker, coal was stored at the rear of the left side tank. Often coal was also piled on the top of the firebox casing. BR fitted coal rails to boost the coal capacity. 7226 followed GER practice with a tool box on each tank, whilst the other members only had one tool box on the left-hand running plate.

When driven too fast, the Y4s had a tendency to "plunge". This was accentuated by the poor quality track which they ran over. This "plunging" was very uncomfortable for the crew, but more seriously, could damage the drain cocks. The Works fitter "strongly disliked" the constant refitting of new drain cocks to the Y4s!

5in gauge plans and castings for a live steam Y4 are available from Doug Hewson (Models). R.J. Bray has also produced drawings for a 5in gauge live steam Y4. The current availability of parts and plans is unknown.

Thank you to the P.H. Groom collection for permission to use the above photograph of Departmental No. 33.