The Class 9P 4-6-0s were Robinson's largest passenger locomotive design. The first locomotive was built at the end of 1917 and named after the then Great Central Railway's (GCR) chairman Lord Faringdon. It is said to have been inspired by the London & North Western Railway's (LNWR) 'Claughton' class, although they had little in common other than they both had four cylinders.

After the end of World War 1, five more B3s were built in 1920. With Grouping in 1923, none of the B3s were cut down to the Composite LNER loading gauge, although over time they acquired Doncaster pattern chimneys and low-dome boilers.

Although more successful than the B2s, the B3s were not a huge success. They could be fast and powerful, but they tended to burn large amounts of coal.

In an attempt to improve the coal burning, Gresley rebuilt Nos. 6166 & 6168 with Caprotti valve gear in 1929; and Nos. 6164 & 6167 in 1938-39. The main difference with the locomotives with the Caprotti valve gear, was that the poppet valves were mounted vertically. There were two valves at each end of each cylinder: one for admission and one for exhaust. Hence the Caprotti B3s had a total of sixteen valves. The valves were then operated by a cam system operated from the main drive axle. Caprotti valve gear had the advantage that the periods of of release and compression could be kept constant for any degree of cut-off. This resulted in more work from the expansion of steam, and a reduction in the volume to be cleared. Tests with the first two locomotives demonstrated a saving in coal of 16 percent. The cam operating scrolls would often fail, but, but this was fixed with bronze scrolls. The valve cam boxes also tended to overheat. This was eventually fixed by completely removing the covers on the boxes. The rebuilt engines were classified B3/2, whilst the original Stephenson engines were classified B3/1. 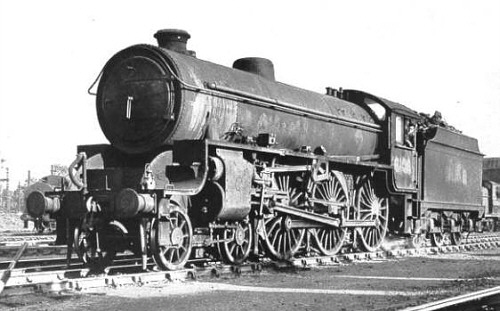 In 1943, Thompson rebuilt No. 6166 to be very similar to one of his B1s and was reclassified B3/3. Only the bogie, driving wheels and the rear part of the frame were kept in the rebuild. The rebuild was too drastic, and the B3/3 regularly suffered from cracked frames. All further B3 rebuilds were cancelled.

The first locomotive, No. 1169 Lord Faringdon was initially allocated to Gorton. Three years later when the other five members of the class were built, they were allocated to Gorton and Immingham. No. 1169 also moved to Immingham. Immingham had very little passenger traffic, so this allocation is a sign that the B3s were not the best of passenger locomotives. The Gorton locomotives hauled the slower services to London. The slower services would have many stops, and no doubt the B3's four cylinders and six coupled wheels were a distinct advantage for accelerating from rest.

After Grouping in 1923, a home for the B3s was found on the GN (Great Northern) Section. They were allocated to the Copley Hill and Kings Cross sheds and operated a newly introduced Pullman service between Kings Cross and Leeds. Replacing the free-steaming Ivatt Atlantics, the B3s gave the GN crews a lot of problems. Some engine crews did have success though.

In 1927, three B3s moved to Neasden, and three returned to Gorton. The Neasden locomotives regularly worked the two night trains from Marylebone to Manchester and Liverpool, as far Leicester. This pattern continued until 1939. The Gorton locomotives quickly moved to Immingham. Here they ran a midday passenger service between Cleethorpes and Leicester, on another schedule that would remain constant until 1939.

The B3s were used on a variety of services during World War 2, often standing in for four-coupled types that were having trouble keeping time with the increasing loads.

With the failure of the B3/3 rebuild, it was decided to withdraw the B3s once wartime motive power pressures had lessened. Withdrawals of the B3/1s and B3/2s started in September 1946 and were complete by the end of 1947. The rebuilt B3/3 was withdrawn in 1949.

No. 1169 Lord Faringdon had a different boiler specification to the other B3s, and has been given its own column in the following table:

None of the B3s survived into preservation.

Bill Bedford produces a 4mm scale (OO gauge) body kit of the B3/3.

G-Train Locomotive Works sell a B3/1 and announced a B3/2 (Caprotti) kit for 4mm scale. The announcement can be on the forums, here.

Great Central Models have a 4mm (P4,EM) scale etched brass kit of the B3 planned for the near future.

David Andrews Locomotive Kits produce a kit of the B3 for O gauge (7mm scale).

No. 6167 Lloyd George lost its nameplates on the orders of Sir Frederick Banbury, during August 1923. The nameplates were lost until 1963 when Kings Cross Top Shed was being demolished, and they were found behind a partition.

No. 6166 Earl Haig lost its nameplates when it was rebuilt during October 1943, due to the lack of a suitable place on the new locomotive for the old plates. No. 6166 was the only B3 to survive into BR ownership and was given the BR number of 61497 in April 1948.

None of the B3s carried their numbers from the first 1946 re-numbering. The 1946 numbers listed here are from the second re-numbering.

Thank you to the Mike Morant Collection for the photograph of B3 No. 6164 Earl Beatty.

Thank you to Malcolm Peirson for the photograph of the Thompson-rebuilt No. 6166.