A number of British railways looked at steam rail motors in about 1900. These rail motors looked like a small tank engine and a coach that had been combined into one unit. The Great Northern Railway (GNR) built six such rail motors in 1905-6, although it called them 'motor coaches'. The six motor coaches were built as three batches of two each. All six were built to specifications provided by Ivatt but each batch was built by a different manufacturer and had distinctive outlines.

Nos. 1&2 were built at Doncaster in 1905. The boiler, cab, and footplate were built on a four-wheel truck, whilst the coal bunker was on the coach frame. As well as the small bunker tanks, larger water tanks were located below the carriage underframe. The engine cab was provided with left-hand drive. The coach had a driving compartment at the rear, and communication to the engine cab was with an electric bell. A chain and pulley along the roof of the carriage allowed the rear driver to adjust the regulator.

The carriage was a conventional saloon design, and had a pivot between the underframe and the engine truck. A luggage compartment was located behind the bunker and in-front of the main saloon. This had five seats for use when the saloon was crowded. The main saloon consisted of third class accommodation divided into smoking and non-smoking sections. With a high roof and elliptical end at the rear, Nos. 1&2 were the very first examples of Gresley's elliptical roof stock.

Nos. 3&4 were reserved for petrol rail cars. Only one of these was purchased and this was withdrawn in 1908 without running a regular service. Nos. 5&6 were built by Kitson & Co. in December 1905. The coachwork was provided by Birmingham Carriage & Wagon Works. Compared to Nos. 1&2, these had a longer boiler and a wide Belpaire firebox. Instead of a bunker on the carriage underframe, Nos. 5&6 had small coal bunkers ahead of the cab. The main water tanks were located below the carriage underframe. The internal carriage layout was similar to Nos. 1&2, but externally they were of the low-roofed semi-elliptical style then common on the GNR. 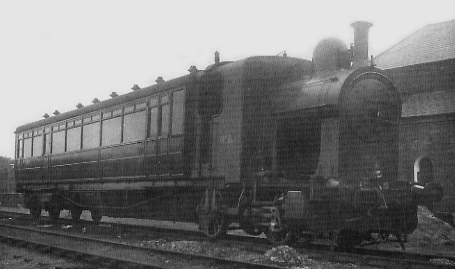 Nos. 7&8 were built in February 1906 at Avonside Engine Co. The coachwork was built by Bristol Coach & Wagon Works. The boiler was similar to that used on Nos. 1&2 but it was pitched higher. A more substantial cab was provided. The rear part of the cab was located on the carriage underframe, and a flexible joint was provided in the cab roof. The boiler was provided with a casing but this was removed in November 1907 after complaints of oscillation. This required minor modifications to the chimney, dome, and sand boxes. The coach bodies were similar to those on Nos. 5&6 except the rear bogie was located 1ft further back. This allowed the water tank in the carriage underframe to be extended. Seating also differed in that the rear section of the saloon had seating for first class passengers. There is some evidence to suggest that the luggage compartment was not fitted with seating.

All six rail motors were provided with vacuum brakes, and were capable of hauling trailers. At least three older carriages were converted into trailers for the rail motors.

Shortly after Grouping (1923), the LNER overhauled all six rail motors. They were recorded as 'sent for traffic', but it was not until 1924 that they were seen in traffic. During this time, the LNER tried to find work for the rail motors, but most of the Area Managers did not wish to use them. Nos. 5&6 were transferred to Hitchin on 29th May 1924. They operated a new passenger service between Hitchin and Hertford North from June 1924. They proved troublesome on this server, and they were sent back to Doncaster in November 1924. This duty was then operated by conventional locomotive services until 1928 when Clayton steam railcar Bang Up took-over.

The only other possible LNER-era duty is No. 2 which was sighted at Neasden in 1925. It is possible that No. 2 was being temporarily used on the Aylesbury to Verney Junction service whilst push-pull equipment was being transferred between locomotives.

Rebuilding was first proposed in December 1916 when plans were produced to convert the rail motors into steam rail motor wagons with a 20 ton goods capacity. This plan was abandoned but replaced by a new scheme in November 1920. This split the engine units into 0-4-0T tank engines, and the carriages into twin articulated sets. These scheme was revived in November 1924 but with the decision to scrap the engine units.

I am not aware of any models of the Ivatt Steam Rail Motor Coaches.