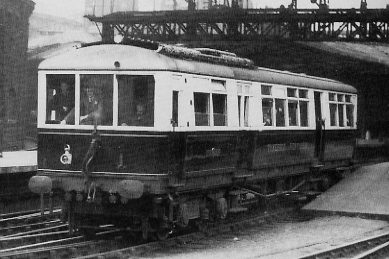 During the 1920s, the development of high-speed diesel oil engines led to the adoption of oil-electric railcars in Continental Europe, and associated reductions in fuel costs. This contrasted with Britain, where steam railcars (eg. the Sentinel steam railcars) continued to be developed. In 1931, Sir W.G. Armstrong, Whitworth & Co (Engineers) Ltd designed and built a diesel-electric railcar to demonstrate the possibilities of this technology. The railcar was designed to demonstrate multiple-unit operation as well as railcar-trailer operations. This was fitted with a Sulzer-designed diesel engine that was built under license by Armstrong Whitworth. With a 4-stroke cycle and six cylinders, it was capable of 250hp at 775rpm. The engine and generator were mounted in the coach underframe behind the front driver's compartment. The rear of the railcar was also fitted with driver's compartment and controls. The front bogie was powered with two General Electric traction motors. The maximum design speed was 65mph. Vacuum brakes and hose connections were also provided.

The body was built by Craven Railway Carriage & Wagon Co. using riveted sheet steel. A 1-ton capacity luggage compartment was located behind the engine compartment. The passenger compartment consisted of two saloons divided by a central vestibule with double sliding doors. Both saloons could seat 25 passengers with seats in a 3+2 arrangement.

This first railcar was named Tyneside Venturer and commenced a thirty six week trial on 11th April 1932. These trials started with regular passenger services in the Newcastle area, and moved to Middlesbrough on 18th October. It was officially purchased by the LNER on 24th November and officially handed over on 12th December 1932.

A fourth Armstrong-Whitworth diesel-electric vehicle entered service with the LNER in 1933. This was the un-named No. 294 lightweight rail bus. Completed in May 1933, it performed six months of trials before entering regular services in the Newcastle area in September 1933. It was not taken into official LNER stock until August 1934, and is believed to have only been kept as a standby for one of the larger railcars.

The rail bus was built with a two-member frame and underfloor engine, in a similar manner to a road vehicle. A standard Saurer 95bhp diesel engine was fitted. One traction motor was mounted on the underframe and drove the leading axle of the front bogie via a cardan shaft and worm drive. A streamlined body was constructed by Park Royal Coachworks, and held two driving compartments, luggage compartment and a 57-seat saloon. The saloon had centrally positioned sliding doors and seats in a 3+2 arrangement. Brakes were in the form of road type drum brakes operated by compressed air.

All of the railcars gave their best performances during the initial trials when they were often used on demonstration runs. Tyneside Venturer achieved a top speed of 64 mph during one demonstration. During regular service trials in the Newcastle area, it gave an average fuel consumption of 5.135mpg and six months without any time lost to vehicle failure. Fuel consumption dropped to 4.1mph when Tyneside Venturer moved to the hillier Middlesbrough area. During the thirty six weeks trial, Tyneside Venturer recorded 34,146 miles using 7,087 gallons (4.82mpg).

Northumbrian operated a demonstration on 14th February 1933 for guests of Armstrong-Whitworth and Shell Mex-BP. Named the Armstrong-Shell Express for the run, it was equipped for twelve passengers with a kitchen, wardrobe, and lavatory. This ran from London Euston to Birmingham New Street for a period of two weeks. Northumbrian was converted back for ordinary passengers by the time it was purchased by the LNER in April 1934.

The rail bus trials recorded higher fuel economies which are to be expected, considering its lighter construction. On 30th July 1933 it worked from Newcastle to London consuming 8.06mpg.

During regular operation, the Armstrong Whitworth diesel-electric railcars suffered from gradually declining performance. This was probably partly due to relatively poor maintenance on what was still a steam railway. All three railcars show a pattern of increasing numbers of workshop visits through the 1930s. Lady Hamilton was particularly troublesome, and was out of service for nineteen months in 1937-8 whilst its diesel engine was rebuilt. Northumbrian also had a long repair period from July 1936 to September 1937 after it suffered an engine failure and a bearing failure.

Railcar and rail bus duties were typically restricted to the former North Eastern Railway network. Tyneside Venturer was regularly seen at Middlesbrough, Scarborough, and Whitby; although during 1935 it was also trialled on ex-Great Northern Railway lines in West Yorkshire. Northumbrian was initially allocated to Neville Hill to haul services on the Leeds, York, Harrogate triangle as an attempt to improve passenger levels. This appears to have been so successful that extra steam services were added. Northumbrian was then moved to Hull in 1936 to join the troubled Lady Hamilton. Rail bus No. 294 was allocated to Scarborough as a replacement for Tyneside Venturer or to operate duplicate services as required.

Rail bus No. 294 was the first to be withdrawn, in February 1939. This was followed by Tyneside Venturer which entered the workshops on 17th April 1939 after a collision at Middlesbrough. Instead of repairing it, Tyneside Venturer was withdrawn from stock a week later. Tyneside Venturer recorded just over a quarter of a million miles with the LNER - the highest of any of the Armstrong Whitworth railcars. Northumbrian was withdrawn in May 1939 when it became due for a general overhaul, and Lady Hamilton was withdrawn on 8th December 1939.

All three railcars were stored at Darlington pending a decision as to whether they could be adapted for other purposes. They were reportedly seen at Darlington Works' scrap yard in August 1944, although the process of dismantling had probably already started by this date.

Note that the carriage diagrams for the Armstrong-Whitworth railcars and rail bus do not show the same set of details. Missing details are marked with a '?'.

I am not aware of any models of the Armstrong-Whitworth railcars and rail bus in any scale.