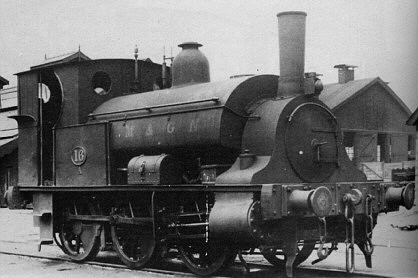 Two 0-6-0ST engines named Ormesby and Stalham were built by Fox & Walker & Co. in 1877 for the Great Yarmouth & Stalham Light Railway. In 1883, this became a part of the Eastern & Midlands Railway, where these engines were numbered 15 and 16, respectively. These numbers were retained when the Eastern & Midlands Railway became the Midland & Great Norther Joint Committee in 1893. In 1901, No. 15 Ormesby was sold and replaced by a new 0-6-0T (LNER J93). No. 16 Stalham entered LNER service in October 1936 when the M&GN stock was taken over by the LNER. It never received an official LNER classification, and was withdrawn in 1937.

The following are the dimensions as quoted in 1936. It appears that No.16 had a number of boiler rebuilds.

Neither Ormesby nor Stalham survived into preservation.

I am not aware of any models of these Fox & Walker tanks.