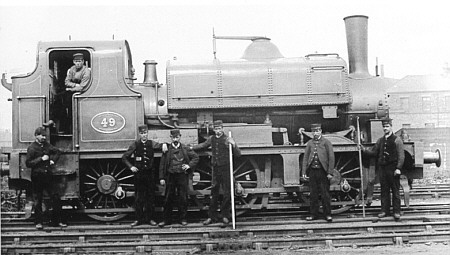 During the late 1860s, Fletcher built the first of his Class '5' short-coupled long-boilered saddle tanks. These broke from North Eastern Railway (NER) tradition of small shunting engines. A number of design variations occurred, and culminated in the '44' Class saddle tanks. These were built between 1881 and 1883, and tended to use the newer parts of withdrawn small passenger and goods locomotives.

Only seven Class '44' locomotives were built. These had the long 24in stroke as used on a number of older NER goods engines. At least two of the engines re-used crank axles from withdrawn locomotives.

Neither T.W. Worsdell nor W. Worsdell liked saddletank designs, and they built large numbers of side tank shunting engines for the NER. These began with the J71 (NER Class E) in 1886.

The Class '44' boilers were in need of replacement by the late 1890s, so W. Worsdell decided to rebuild all of them as side tank locomotives. Previously, W. Worsdell had noted that he preferred to build new locomotives after his experience with the expensive rebuilds of the Class '964' engines. However, the Class '44's had a chassis that was virtually the same as the J71. So by replacing the superstructure and boiler, a rebuild could easily produce a locomotive that was virtually identical to the J71. All seven Class '44's were rebuilt with side tanks between 1898 and 1902.

The Class '44's received very few modifications after their rebuilds. Their coal bunkers had coal rails. These received plates before Grouping (1923).

The Class '44's initially worked the Northern Division of the NER. By Grouping, they were allocated to East Hartlepool, Sunderland, Heaton, and Shildon. By this time, their work was mainly restricted to the shunting of wagons near their sheds.

None of the NER '44' locomotives survived into preservation.

I am not aware of any models of the NER '44' locomotives in any scale.

Thank you to Malcolm Peirson for the photograph of No. 49 as originally built.